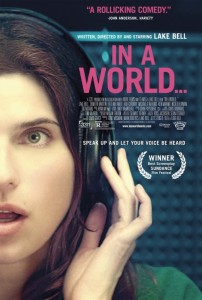 Carol Solomon (writer/director Lake Bell) has a dream to become one of the top voices in commercial movies and television. Unfortunately, it’s a world still dominated almost exclusively by men. Marketing execs have always gone for the most powerfully evocative voices they could find to sell their varied wares. The most notable of these was Don LaFontaine, whose trademark voice started off countless films with the iconic phrase “In a world…” His passing in 2008 created a hole that two other luminaries of the industry hope to fill. One is Carol’s father, Sam Soto (Fred Melamed), who’s preparing to accept a lifetime achievement award. The other is Sam’s occasional protégé, Gustav Warner (Ken Marino), whose silver-spoon lifestyle has left him with a rather distorted view of most things.

Sam’s still got the pipes and the desire but is clearly in the midst of a late mid-life crisis. He’s got the sports car and the girlfriend (Alexandra Holden) who’s easily half his age. He also never misses a chance to put his own needs before everyone else’s. That includes his two daughters, Carol and her older sister Dani (Michaela Suzanne Watkins), who’s dealing with her own relationship challenges with husband Moe (Rob Corddry). 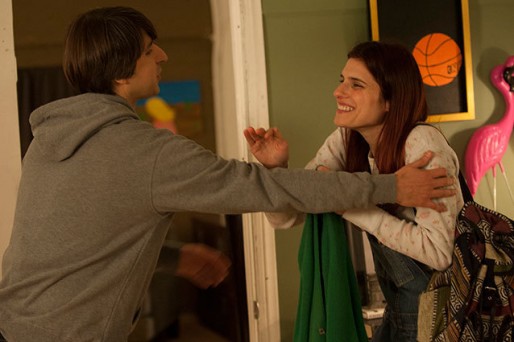 Bell picked a gold mine for her first feature-length film to pen. Voice-over work is one of those jobs that lends itself to comedy. It’s filled with off-the-wall dialogue, ridiculous-looking warm-up exercises and a strange fascination with language, dialects and enunciation. Quirky personalities meld with the material like a falsetto in a Beach Boys tribute band.

The laughs are smart, deep and consistent. Bell doesn’t overplay any of it. Just when a joke reaches the peak of its crescendo, she moves on to another equally enjoyable bit. Along the way, she manages to also deliver a few nice, touching moments that are guaranteed to tug on your heartstrings now and again.

There are some uneven moments and one glaring question mark involving Moe and a tape recorder, but neither is a deal breaker. The acting is nearly pitch perfect with Demetri Martin as Carol’s would-be paramour, earning the biggest bow. Oddly enough, the least believable actor in the group turns out to be Bell herself. She’s good enough but, at times, a bit awkward.

This ensemble effort is a nice, late summer surprise that works as a budding romance film, a father-daughter film or just a great little comedy in a world where laughter wins the day.