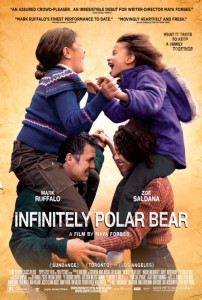 A determined young mother and her mentally ill husband struggle to get by in Infinitely Polar Bear.

Cam Stuart (Mark Ruffalo) was a brilliant young man from a respected, successful family. His wife Maggie (Zoe Saldana) found his high-octane, quirky personality quite captivating. She never suspected that the very traits drawing her to the man of her dreams were little more than the symptoms of a manic-depressive man. As their family grew to include two young daughters, so too did the negative side of Cam’s condition. He couldn’t hold a job, handle real responsibility or even be trusted to reliably care for their daughters. That left Maggie to carry the weight of the entire family on her meager, but always hopeful, shoulders.

This occasionally touching tale shows us the complexity of what later became known as bipolar disorder. The true breadth of Cam’s illness manifests itself differently to everyone around him. While growing up, Cam’s own family saw him as nothing more than eccentric. His kids find him endlessly entertaining. To them he’s just an oversized child. Maggie’s the one who has to deal with the real consequences of his instability, and it takes a vicious toll on their marriage. 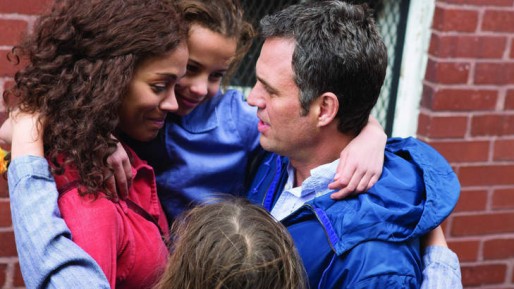 The grainy, muted look of the film works on two levels. Not only is it a perfect match for the late ’70s setting, but it also provides just the right rough edginess for the material. Cam’s condition wouldn’t resonate quite the same way with a more glossy presentation. Ruffalo could play this guy in his sleep. The two young actresses who play their daughters are also capable. It’s Soldana’s performance that matters the most. She delivers an elegant, understated depiction of a wife at the end of her tether.

Perhaps it’s a bit too understated for the good of the film. Everything we experience fails to ever rise to a solid boil. It barely manages enough heat to rise above room temperature. Consider one of the film’s most obvious realities: Cam and Maggie are an interracial couple in an era when this would have been viewed as abnormal and risky. Nothing is said about it, and no one around them seems to even notice. In a current-day setting, it wouldn’t even bear mentioning, but this isn’t a current-day film. It feels like a major missed opportunity. The low-key approach extends to the main characters as well. Cam and Maggie feel like strangers. We just can’t get enough of a feel for them to really care. Everyone has their challenges, but everything here feels more like minor inconveniences.

Infinitely Polar Bear definitely delivers on performances from all involved. What it doesn’t deliver is a lasting impression. The most memorable thing about it is its quirky title.