This weekend was another double-movie weekend in my sure-to-fail quest to get back into the swing of seeing nearly as many movies as I have the last two years.

First up was Inglourious Basterds. It’s the latest movie from scatter-shot director Quentin Tarantino. I’ve enjoyed a few of his past efforts—most notably Kill Bill Vol. 1 which I think is a bit of a masterpiece of film-making. I also enjoyed Pulp Fiction but not as much as most of my friends. 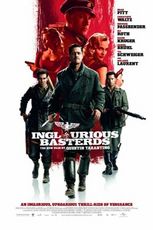 Inglourious Basterds looked a bit strange to me from the previews but I gave it a shot anyway and, sadly, I think my first instincts were right. The movie seems completely disjointed. Much of it starts down a path only to abandon it almost immediately. You get one narration from Samuel L. Jackson that seems forced and out-of-place. It was as if Tarantino wanted to just see if people knew it was Jackson. We get another scene where one of the main cast is highlighted. The action stops. The screen zooms in and we get a graphic textual overlay highlighting that we’re about to get detail on one Sgt. Hugo Stiglitz. It sets the stage for us to meet the other members of the Basterds team this way but then we never see that treatment again. What’s the point?

The strangest thing about the movie is that it actually has very little what-so-ever to do with the Basterds at all. The movie tells us about them in 1941 and then jumps to 1944 assuming we’ll just fill in all the blanks while it goes off and tells a different story.

The script is also filled with many huge plot holes. There’s a bit about a shoe and another about speaking Italian that just don’t wash. Our brilliant main protagonist, played by Brad Pitt, goes dumb at the drop of a hat in one key late scene, for example.

Annoyingly the movie goes through the entire story not once explaining the odd spelling of “basterds”. There’s a hint at it regarding the name being given to them by the enemy but that still doesn’t explain the spelling. Did the enemy write it down in broken English?

I also had a bit of trouble with the entirely unexpected huge revisionism of history that didn’t seem at all necessary.

Some scenes highlight “key” characters by using on-screen arrows to point them out. For example, at the start of the final sequence of scenes we get a brief glimpse of a man highlighted as Martin Bormann. That’s great except for two things. First, you never see him again. Second, unless you’re a World War II buff you probably have no idea who Martin Bormann was. Maybe he was Adolf Hitler’s assistant or maybe he was a local well-hung gigolo there to entice the ladies (or men). You’ll never find out here.

These types of things aren’t the only details left out. There’s virtually no decent character development what-so-ever. None of the characters really ever get fleshed out with the possible exception of the main Nazi officer. This is doubly annoying as virtually every scene in the movie is overly long by at least 100%. Scenes just drag along for no benefit.

Lastly there’s the gore. Tarantino often includes a heft of gore in his movies. When it’s done right it comes off as amazing art. Here it comes off as a child’s daydream tantrum being realized.

There are some goodies to be had. The movie is, at times, funny. It also boasts some great visuals including a very eerie and unforgettable final sequence.

Chief among the positives are a fantastic opening scene (still too long though) and the unforgettable character portrayal of the main antagonist—a Nazi officer played by foreign actor Christoph Waltz.