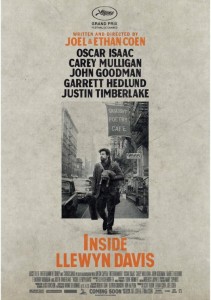 A confined cat, desperate to explore his tantalizing surroundings, is waylaid by a perpetual loser in Inside Llewyn Davis.

Okay, so that’s not the intended synopsis of the latest Coen Brothers film, but it likely would have made a more entertaining tale than the one they actually produced. This period piece from 1961 features a struggling folk singer — Llewyn Davis (Oscar Isaac in a standout performance) — who has to depend on a series of mysterious characters to avoid a life on the streets of New York City.

Davis is committed to his love of music and travels from one dive to the next, hoping against hope for the big break he’s sure is due. Along the way, he endures a cadre of curious acquaintances that have become a normal part of his daily life. Davis has a best friend (Justin Timberlake) with a winsome wife (Carey Mulligan) who never ceases to find another way to tell him how pathetic he is. There are also the Gorfeins (Ethan Phillips and Robin Bartlett), who just seem to like the cachet of putting their folk singer friend on display. Once he’s exhausted everyone in town, he heads on the road, where he meets a very strange character (John Goodman) and his mysterious valet, Johnny Five (Garrett Hedlund). 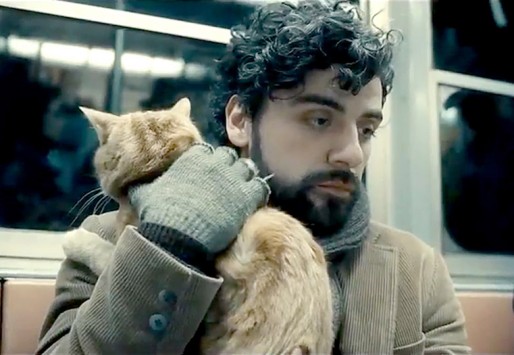 The one performer that doesn’t get the billing deserved is the aforementioned cat. It’s the pet of the Gorfeins, and an unintended mistake results in Davis spending half the film taking responsibility for him. If they gave an award for animals in film, this felonious, scene-stealing feline would be a shoo-in.

To say that the film is a dark comedy isn’t quite right. It’s more of an introspection, with a small smattering of cynical jibes, interspersed with a number of fairly forgettable musical numbers. Oddly, the most memorable tunes came from the other performers.

The rest of the film felt very disconnected and skit-like as Davis moves from one location to the next. A soporific car trip (with Goodman and Hedlund) pulled me completely out of the film. We never find out anything about them, and Davis certainly doesn’t seem to care, which seems to be the point. As a result, the entire sequence just comes off as awkward, unfunny and bizarre.

There’s also a rather jarring flashback concept that drives the core message of the film, but the mystery is so minimal that it’s just not worth the confusion.

The Coen Brothers offer a very stylized film about a boring, listless loser. Congratulations. As a result, we end up equally bored and listless.