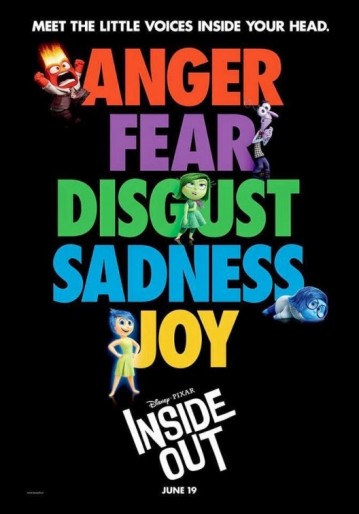 In the ‘90s, there was a sitcom on Fox called Herman’s Head in which four actors portrayed the emotions at odds in lead character Herman’s brain. The show was funny and creative, and it lasted for three seasons. When I first heard about Inside Out, I immediately thought of Herman’s Head. If this animated Pixar film drew inspiration from the Fox hit as a starting point, it went much further creatively with the mechanics of the lead character’s brain. What is sorely missing is the comedy and lightness that you would expect from the trailer and other promotional material. The film spends way too much time in a sad, dark place before rebounding. I expected great Joy from Inside Out, but I Fear that some bad story decisions may instead move you at times between Anger, Disgust and permeating Sadness.

Cowriter/director Pete Docter previously directed Pixar hits Monsters, Inc. and Up — a great track record for this third feature film. Codirector Ronaldo Del Carmen has a background in the art and animation departments at Pixar, which may explain why the animation in Inside Out is so lush, detailed and colorful. Cowriters Meg LeFauve and Josh Cooley are relatively new, so they may be the source of the uneven script. I read that Pixar used fewer animators than in previous Pixar productions. While that is amazing given the quality, the filmmakers should have added some other people to the writing team.

The story is an unusual and creative way of showing a little girl growing up in light of changes in her life. Preteen Riley (voiced by Kaitlyn Dias) and her parents move from Minnesota, where she loves to play hockey, to San Francisco. As she adjusts to the new house, environment, school and friends, she experiences a range of emotions that interact within her brain’s Headquarters for control of her body. Prior to the move, Joy (Amy Poehler) pretty much ruled the roost because Riley was so happy. Now, emotions Anger (Lewis Black), Disgust (Mindy Kaling), Fear (Bill Hader) and Sadness (Phyllis Smith) take over the control panel in Riley’s brain from time to time. These competing emotions create memories of their type and color, which are represented by spheres that get sent to long-term storage at the end of the day while Riley sleeps. In a sort of road trip, Joy and Sadness venture into other areas of the brain, and they must return to Headquarters to restore some balance before Anger, Disgust and Fear get Riley into trouble.

A film like this lives or dies based on the voice cast, and this group is strong. Some of the main actors have appeared together before on other projects. Regardless of past interaction, Dias and the emotion actors fit their roles perfectly. Poehler has played all kinds of characters in the past, and Joy draws from the bubbly, excitable aspect of her personality. Black’s raspy voice and irritable nature peg him for Anger. Hader is such a talented impressionist — the current voice of Mr. Peanut in commercials — that Fear doesn’t seem like much of a challenge. The personable Kaling wouldn’t have been my first choice for Disgust, but she must have drawn on some past memories to channel this character. Smith is probably my favorite; she plays this kind of Debbie Downer role perfectly. Richard Kind also has an important part as Dias’s childhood imaginary friend Bing Bong. If I still had an imaginary friend, I would want one as welcoming and fun as Kind. Expect to hear John Ratzenberger, too, as he continues his streak of voicing a character in every Pixar feature film. 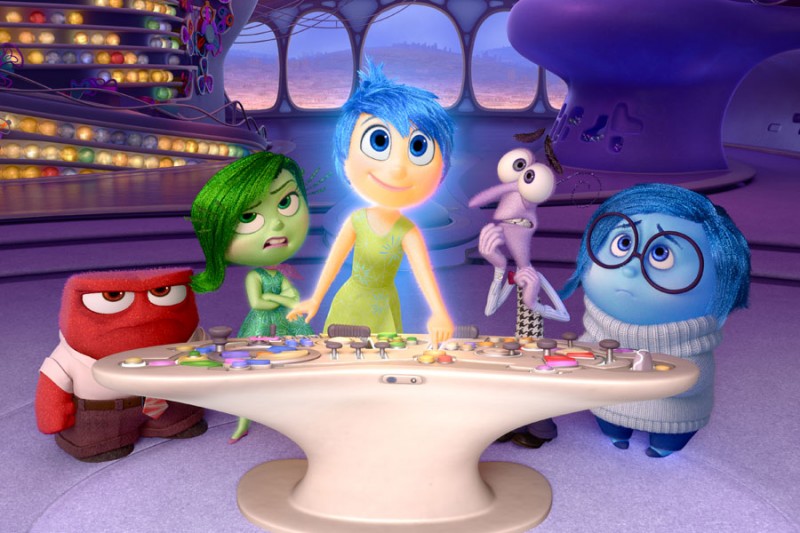 The most impressive aspect of Inside Out for me is the whole layout of the brain in terms of how the memory spheres are processed and stored and how other parts of Riley’s personality are represented. There are islands of major personality traits like Goofball Island, and there’s a giant memory dump where old memories go to dissolve. It’s a very creative design, and Joy and Sadness learn about some of the sections of the brain just as we do. When the story takes the duo into dreams, the imagination and the subconscious, the writers show the most potential. Unfortunately, the plot is just dragging at that point. It’s almost like the writers disembarked from their own train of thought. These areas of the brain could be incorporated into an awesome video game. So far, I don’t see any out there except a color-matching app, which is actually more fun than the movie.

The graphics are absolutely beautiful, so Inside Out is really wonderful to see. Avoid the 3D version. It really adds nothing and actually takes away from the experience because it dulls the bright colors that are so intrinsic to the world. The emotions themselves are complicated assemblies of computer graphics. You can really only see the detail in still shots. The characters are really bundles of energy, so they have a fuzzy surface and richly detailed hair and clothing. The rows of memory spheres in long-term storage really reminds me of the scenes in Monsters, Inc. that involve the door storage area. Both fill up your field of vision with lots of colorful objects, and that would never have been possible in traditional animation without artists going crazy.

All of the elements are there for an amazing movie experience. Instead, you’ll leave the theater feeling down or depressed if you really let yourself be absorbed into the emotional roller coaster of the movie. The emotional nadir of the movie happens in the last third. It left a lump in my throat and had children in tears over what just happened. The only other times that I remember Pixar movies eliciting tears were in the finale of Toy Story 3 and the perfect sequence in Up that details a married couple’s life together. In both cases, it was the adults who cried — not the children. The source of all of this is probably pacing and story design. Joy and Sadness are gone so long from Headquarters that the film mirrors the doldrums that Riley experiences. I could come up with a dozen emotions that would be better substitutes for the existing ones. With four out of five emotions negative in a way, even Joy couldn’t radiate enough energy to overcome them.

It doesn’t help that the accompanying animated short film Lava dabbles in melancholy as well. With stunning animation, a volcano named Uku (voiced by Kuana Torres Kahele) sings a song in search of someone to “lava.” Yes, “lava” replaces “love” in the song, which lends the short cuteness before it kind of goes sad/dark. Director James Ford Murphy has worked in the animation department for many Pixar projects, and this is his first directing assignment. Kahele’s voice is beautiful and suited for the Hawaiian music. Lava follows the love theme of the other recent shorts before Pixar and Disney animated films, and as good as this one is, I’d “lava” to see a different topic explored.

If there’s ever a sequel to Inside Out, I hold out great hope that it will be a very different movie. All of the ingredients are there for Pixar to work their magic. There just needs to be a different recipe. The beginning and end are as exciting as I expected the entire film to be, and the scenes during the credits reveal the unexplored potential of the concept. Maybe they’ll be the starting point for any future stories. Docter was responsible for one of Pixar’s most acclaimed films with Up. Given the mixed emotions and sour aftertaste, Inside Out could be referred to as Down.