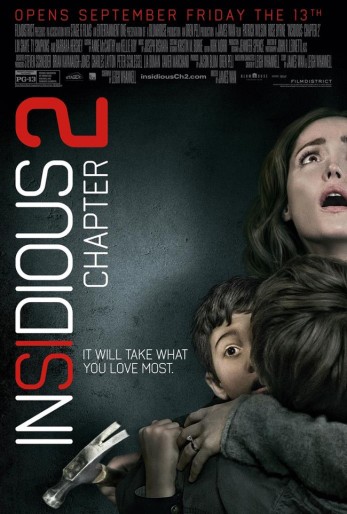 About halfway through watching Insidious: Chapter 2, I realized exactly how to think about this subgenre of horror movies. This sequel, the original Insidious, the recent The Conjuring and so many others are really the film equivalent of a walkthrough haunted house that you might visit around Halloween in sites across the country, including transformed amusement parks like Knott’s Berry Farm and Universal Orlando Resort. They have a loose story to theme the location and then combine lots of loud noises, characters appearing out of nowhere and various other boo scares to keep you on edge. What I like about both Insidious films is that they go beyond this subgenre to include some truly chilling scenes for maximum effect. If you’re not jumping out of your seat, you’re at least getting goose bumps. Insidious: Chapter 2 delivers almost the exact same experience as the first film with the same cast and filmmakers, and it still manages to chill and entertain with its clever story that explains more about the characters and events in both movies and kept me interested.

Filmmakers don’t always deliver the same quality in sequels, but director James Wan and writer Leigh Whannell made a movie that feels like it was filmed immediately after the original. Wan is still enjoying the success of The Conjuring, so I was surprised to see a similar movie so soon. Fast & Furious 7 is up next for him, and I doubt that Vin Diesel and Paul Walker will encounter any ghosts or slamming doors. Insidious: Chapter 2 is an unoriginal title; however, it feels exactly like the next part of the same story because the plot starts the same day as the original right after its abrupt ending. Josh Lambert (Patrick Wilson) and Renai Lambert (Rose Byrne) go to live with Josh’s mother, Lorraine Lambert (Barbara Hershey), after Josh saved their son Dalton (Ty Simpkins, also featured in Iron Man 3 as the kid who helps out Tony Stark) from a demon. The Insidious movies involve a realm called The Further where your consciousness can go when you dream. Dalton wandered too far away from his body in his dreams, and Josh enters The Further to guide him back to his body before a spirit can possess it. In Insidious: Chapter 2, the premise is that Josh did not really come back from The Further in Insidious and his body is possessed by a malevolent spirit that’s been stalking him since childhood. Flashbacks show Josh as a child, and they’re crucial to people warding off the ghosts and retrieving Josh’s spirit from The Further.

The plot of Insidious: Chapter 2 is just like the first film; only the particulars have changed. In an intentional oversimplified description of both films, a lot of spooky stuff happens that escalates in nature and frequency, and then somebody brave enters The Further to retrieve a lost spirit. Psychic Elise Rainier (Lin Shaye) was killed in Insidious, but death never stopped a clever writer. She returns in force as both a younger version played by Lindsay Seim in the flashback sequences and as a helpful spirit in The Further. She got applause and almost a standing ovation when she appeared in this film, and I haven’t seen that kind of reaction to a character in many years since Sigourney Weaver loomed on screen in a power loader during the climactic fight scene in Aliens. Elise’s assistants from the first film, Specs (Whannell doing double duty) and Tucker (Angus Sampson), are her eyes, ears and hands in our realm in this movie. Another psychic peer named Carl (Steve Coulter) assisted Elise with Josh as a child and returns here to help her retrieve Josh as an adult. The cast is good here. Wilson and Byrne may be slumming to a degree given their other work, but they pull it off. Look for standout Danielle Bisutti as a rather angry spirit. She’s also in the upcoming Curse of Chucky, so I look forward to that movie even more. 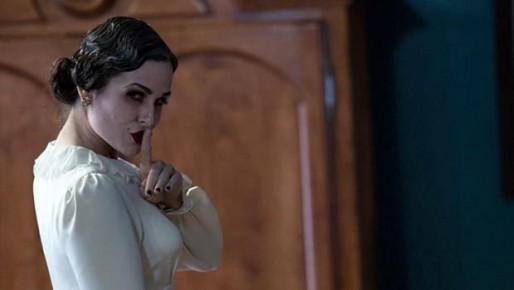 Danielle Bisutti plays a rather effective ghost in Insidious: Chapter 2.

I was quite skeptical before I saw Insidious: Chapter 2. I watched the original the night before to familiarize myself with the story, and I didn’t expect the sequel to be as good. Instead, it’s even better. It’s really tough to make an audience jump. There are probably college courses on this skill at schools around the world. Wan and Whannell know how to do this in a variety of ways from cheap scares like loud sounds to the more effective extended scenes in which the audience sees a ghost on screen long before a character knows it’s there. I went back and forth between those goose bumps and boo scares, which truly is physiologically like riding a roller coaster. Those hills scare the hell out of you, but the rush along the track exhilarates you and gets the heart pumping. I like the variety of ghosts, too, from the unnamed spirits to others that are connected to the plot in a deeper way. The filmmakers managed to integrate the plots of both films with The Further such that I can’t think of these films in the future without acknowledging how they’re connected as one entity. If there’s a third film, as I suspect there might be after a few years, I’d love to see this kind of integration again. There are backstories for some of the ghosts, too, including at least two of the main ones, so Insidious: Chapter 2 rises above other films in its subgenre to deliver a little meat on the bones.

As we enter the Halloween season, there will be a lot of horror films pushed into theaters to accompany trips to haunted houses and the return of The Walking Dead and American Horror Story. If the movies are as good as Insidious: Chapter 2, I’ll be very happy. If not, I can always look forward to the sequel to Sharknado next summer. My only complaint about this film is that they dubbed Seim’s voice in the flashback scenes with Shaye’s voice. From the moment she started talking, it looked off somehow, and that’s really unnecessary. Maybe Wan thought that an obvious bad dubbing job would call attention to the fact that this is really Elise for the audience. If it was intentionally bad, it was poor judgment. Either way, audiences are sophisticated enough to understand that characters won’t look the same in flashbacks, and Elise is named and introduced at the start of the flashback. Insidious: Chapter 2 is one of those few films where I can say that you’ll love this one if you liked the original. If you’re new to the series, you’ll enjoy a real treat along with the moviemaking tricks.