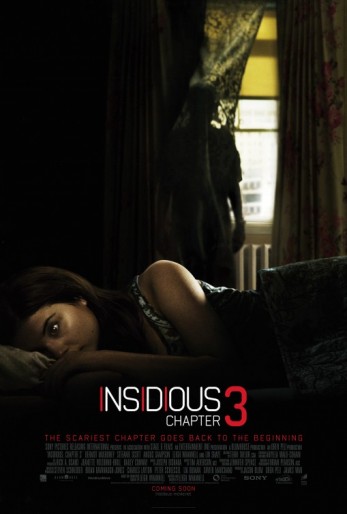 Prequels are always problematic because they begin with a distinct disadvantage. They do not continue the story in the original film or series, and even worse, the elephant in the room is that they need to fit into the time line and plot as laid out before without any radical changes. For all of the elements of the prequels to Star Wars that were good, they ultimately just told the backstory of Anakin Skywalker/Darth Vader and set the stage for the original trilogy. Similarly, Insidious: Chapter 3 focuses on the experiences of psychic Elise Rainier in an earlier case before the previous two movies. This film stands on its own, so newcomers can see what the series is all about with just this one entry. Insidous: Chapter 3 offers more of the same kinds of scares and spookiness and is bolstered by two strong female performances.

Writer/director Leigh Whannell takes over the reins from James Wan. Wan and Whannell respectively worked together as director and writer on the two previous Insidious movies as well as Saw and Dead Silence. Insidious: Chapter 3 is Whannell’s directorial debut, and he manages to keep the same style and feel that fit right in with its predecessors. The Insidious films are all similar in that they contain both a realm called The Further where the dead go and a living person who connects to an evil soul in The Further. Many horror films in the past like Poltergeist and Hellraiser have used this concept of another reality where the dead reign and try to attract the living. The Insidious series only loosely defines The Further so that it can change as the evil spirits desire and still bear some resemblance to reality.

Quinn Brenner (Stefanie Scott), her father Sean (Dermot Mulroney) and her brother Alex (Tate Berney) are still grieving over the loss of Quinn’s mother. Quinn calls out to her mother’s spirit for guidance, but she never answers. Instead, Quinn visits Elise (Lin Shaye) and asks for her help in reaching her mother. Elise warns her that other, darker spirits will hear her pleas, and sure enough, a ghost in a hospital gown with a breathing mask credited as The Man Who Can’t Breathe (Michael Reid MacKay) torments Quinn and nearly gets her killed in order to join him. While recovering, Quinn tries to rid herself of the ghost with Elise taking trips into The Further to root it out.

Scott has appeared mostly in a number of TV series, notably the Disney show A.N.T. Farm. She completely breaks that mold with her outstanding performance here. She’s a perfect mix of smart, vulnerable, cute and determined that works for a horror film, yet she’s no pushover here as you might expect. Shaye has a list of credits a mile long, and unlike the usual small roles that pepper her IMDb listing, she’s one of the stars here. It’s so nice to see her with expanded screen time because she serves as a nice counterpart to Scott. Other actresses might come off hokey in such a role; Shaye makes you believe that she could get rid of any bad spirits who might be hanging around. Notably, Angus Sampson as Tucker and Whannell himself as Specs reprise their roles as ghost hunters and join Elise in the final battle for Quinn’s soul. Mulroney is solid in the father role. I don’t recall many horror films with him in them. He brings the right gravitas and energy to this one.

A horror film is only as good as the scares it elicits and the unsettling feeling that it causes. Insidious: Chapter 3 certainly has its share of both. The Man Who Can’t Breathe is a fairly terrifying ghost. He’s relentless in his pursuit and shows up when he’s least expected. Fortunately, the film doesn’t use too many of the cheap scares where something or someone pops into frame. They’re still there, though, and I still jump at them even though I’m not impressed with that kind of manipulation. The movie is much better when ghosts and their evidence are right in front of the characters as happens when Elise enters The Further or follows black footprints along the floor in her house. I could have done with less stuff about the family and more horror. That balance goes too far in the family direction at times and slows the pace. Sadly, there are some clichés employed. At this point, I lose respect for a filmmaker when there’s a scene with a character hanging over the edge of a bed to look underneath. I would never do that if I thought that something was underneath the bed, and I don’t expect a horror movie’s character to do it, either.

Insidious: Chapter 2 wrapped up the story nicely, so I was surprised to hear about this movie. I don’t expect there to be any other films in this series. If there were, I would want it to take place almost completely in The Further because the level of fear there is so high. The producers tried to translate the horror of the film series to haunted houses and other real-world experiences. That’s an interesting approach. I just worry when someone will really get scared to death in one of these things. Wan and Whannell have created some lasting memories with their films, and I look forward to any future collaborations. Unlike the never-ending, diluted Saw series, three would be the perfect number as the end of the Insidious movies. The trilogy is consistently good with great acting and frights, and some things should just be left in the dark where they thrive rather than be brought to the light once again.