This week found me stuffing in another 2009 film in Clint Eastwood‘s latest film Invictus. The movie focuses on a specific segment of Nelson Mandela‘s early Presidency in which he enlists the aid of the national rugby team to help cure the ills of his fragile country. 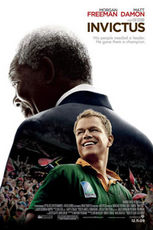 Mandela, played exceptionally by Morgan Freeman (as if he could play a role any other way), having lived through more trying time than anyone should ever be forced to endure, recognizes that revenge isn’t the correct path no matter how much the populace may desire it. He sees opportunity in every situation regardless of how isolated or unrelated it may seem to those around him. The team, the Springboks, represent everything about the past regarding South Africa. Whites love the team and blacks root for whoever they play against. The local rugby organization wants to abolish the team, its name, its colors and rebuild it in their own image. Mandela realizes that all this will do is prove to the whites of the country that the blacks are acting exactly as feared and that nothing is safe any longer.

His plan is to express to the team just how important their mission is and how far-reaching. He does this by appealing to its captain, Francois Pienaar, played by an overly-buff Matt Damon (he looked so muscular and bloated that I couldn’t help but think steroids must have played some part). Thankfully it’s a perfect match as the captain knows exactly what Mandela is after and has the ability to overcome his own team’s racial bias.

Much of the early part of the film plods along at a very slow pace. People were fidgeting around and cell phones were getting heavy use. I’m not sure, after the fact, if all the setup was really necessary but Eastwood knows a lot more about telling a story than I do. I just know I felt it could have gone more quickly for my tastes. The last third of the movie is entirely a different story. Everything got attentive so much so that when the movie finished not a single person left their seat until mid-way through the final credits.

So what about the movie itself? Well, for one thing, if Nelson Mandela is even a tenth of the person they portray in this film then he’s one amazing individual the likes of which doesn’t come around (at least in politics) very often. His background and the way in which he cuts through the chaff and gets to the meat of an issue is a sight to behold. The rugby scenes are also well done though it does take a while for non-rugby fans to figure out what’s going on during the games.

In the end it’s another successful Eastwood entity. How many more can he have in him is what I wonder now. I hope it’s a lot more yet. Invictus isn’t a perfect movie but it’s quite effective and entertaining.