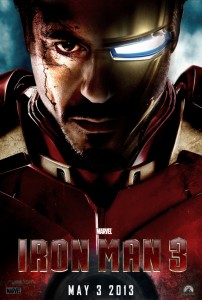 Robert Downey Jr. returns in Iron Man 3, taking on a new villain in the latest installment of Marvel‘s heaviest of heavy hitters.

I’m not a comic book guy, and frankly, before I saw the first Iron Man movie, I’d never even heard of the character. However, I loved both the concept and the film. Then came its sequel, which I ranked as one of the worst five films of 2010.

This latest effort opens with Tony Stark (Downey Jr.) narrating a story that takes us over a decade back to a brief meeting between Stark and a young, brilliant — but handicapped — entrepreneur named Aldrich Killian (Guy Pearce).  Killian’s pleas for funding fell on deaf ears because Stark was too busy with the young and attractive Maya Hansen (Rebecca Hall) to give Killian any respect whatsoever.  All three characters are integral when the world is beset by a Middle Eastern terrorist called The Mandarin (Ben Kingsley).

Also returning are Pepper Potts (Gwyneth Paltrow with an abdomen that someone was overly enamored with), Colonel Rhodes (Don Cheadle) and Happy Hogan (Jon Favreau).

I don’t like to get into plot elements in a review, but I couldn’t really do so even if I wanted to because the entire first hour of the film is nearly incomprehensible. There’s a ton of dialogue that seems to go nowhere and everywhere all at once. The core plot is simple enough that, if they stuck to it, the movie would have been over before the lights dimmed. The rest is a bunch of droning comments by Stark that grow stale after 15 minutes.

There are also countless scenes that push disbelief past the breaking point. When Stark is supposedly “off the grid,” the bad guys find him instantly without any attempt at an explanation. There’s also an entire subplot with a young kid in Tennessee that’s just a head-scratching extravaganza.

When The Mandarin finally shows up for more than a quick cameo, things improve greatly. Kingsley is absolutely terrific in the role in every scene.

This being a comic book superhero, there’s going to be a lot of action, and the action here is fast, furious and nearly relentless. Much of it, like the dialogue, is as impenetrable as Iron Man’s suit used to be.

I love Guy Pearce, but he’s paper thin. We get very little in the way of background, so his later choices ring as hollow as the myriad of new empty suits.

The 3D didn’t stand out at all, and the visuals were continually challenged by so much frenetic distraction that you’re often not fully clear about what’s going on. The action you can follow is, thankfully, first rate and supported by a nice score.

Unfortunately, my favorite part of the entire film was the final credits, which were really something! It marked the first time that I was drawn in by the look and the soundtrack. Go figure.

In the final analysis, for non-comic book fans, this falls squarely in between the first and second installments of the franchise. If this is what we should expect in future sequels, then I’ll root for rust.

UPDATE: I rarely do this, but I thought I’d follow up the review with more insight. It seems that many people are taking issue with aspects of the film. For example, where is S.H.I.E.L.D.? This organization — run by the character portrayed by Samuel L. Jackson — was there for every aspect of Iron Man 2. Tony couldn’t even call on them in this film. In response, the producers have now gone on record to say that all will become clear when we see the next Captain America installment. Um, what? In other words, we now must all commit to seeing every Marvel movie to have any hope of understanding what’s going on with the movies of any one character. My comic friends tell me that this is the worst of what happens with comic books today. They force you to read all of them even if you’re only interested in one character. Not good, folks.