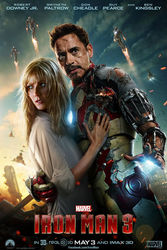 I usually dread sequels of any popular film and superhero sequels in particular. They mostly dilute the original instead of expanding upon it, but there are many notable exceptions like Aliens and The Godfather: Part II. Superhero sequels are another creature entirely. In many such movies, the villains set the tone for the experience — sometimes even more than the plot. I am happy to declare that Iron Man 3 gets just about everything right. The only complaint that I have is that they didn’t do another wonderful musical tie-in like they did between Iron Man 2 and AC/DC. The Avengers is arguably the best superhero team movie. Similarly, Iron Man 3 totally took me by surprise and ranks for me as the best individual superhero movie in recent memory.

Perhaps the difference is the change from director Jon Favreau — relegated to only acting here as Happy Hogan — to cowriter/director Shane Black and cowriter Drew Pearce (writer on the UK TV series No Heroics and Lip Service). Black is writer/director of a great indie film called Kiss Kiss Bang Bang that starred Robert Downey Jr. Iron Man 3 should be a calling card for him to direct just about anything going forward. It would make a cool factoid it it were true, but Pearce is no relation to actor Guy Pearce. Kiss Kiss Bang Bang effectively mixed humor and action, and that approach carries over to Iron Man 3 with laughs balancing the more serious scenes of destruction and gravitas.

The less said about the plot the better because there are many cool surprises and twists in the film. The all-star cast is led by returning stars Downey Jr. as Tony Stark aka Iron Man, Gwyneth Paltrow as business partner and love interest Pepper Potts, Don Cheadle as James Rhodes aka War Machine/Iron Patriot, the aforementioned Favreau and Paul Bettany as the voice of Stark’s computer Jarvis. New main characters include nerdy-creepy scientist Aldrich Killian (Pearce), botanist Maya Hansen (Rebecca Hall) and ponytailed terrorist The Mandarin (Ben Kingsley). Also figuring into the plot are The Mandarin’s loyal soldiers Brandt (Stephanie Szostak) and Savin (James Badge Dale), who have been injected with the Extremis virus, which makes them heat up and explode unless they regulate the fire inside.

I was impressed with the acting all around. There’s almost none of the type of campy acting that you might see in superhero movies or those with comic book origins. Stark is always ready with a one-liner or snarky comment. That’s not absent here; instead, Stark’s better comebacks and wry observations are tied to the right moments. The Mandarin causes terror and destruction at every turn, even going after President Ellis (William Sadler) at one point. Miguel Ferrer goes underused as Vice President Rodriguez, but in a star-heavy cast, that is to be expected for some actors. I’m sure somebody has already collected the appearances of Stan Lee in Marvel superhero movies in a YouTube video, and Iron Man 3 has a less prominent but still noticeable cameo.

The plot takes Stark all over the country from his house in Malibu to Tennessee and Miami, Florida. Stark struggles with his identity — does the suit make the man or vice versa? — as well as how to best protect Potts from those out to get him. The sequences in Tennessee introduce Harley Keener — a kid who helps the in-hiding Stark — as portrayed by Ty Simpkins in a standout performance. It’s unlikely that you’ll see Simpkins in a future movie in this series, but he makes a great impression in this one, especially because he somehow helps Stark overcome anxiety issues. A flashback to New Year’s Eve 1999 in Bern, Switzerland, sets the stage for the story and offers some laughs with the hairstyles of Killian and Hogan. I’m not entirely certain why Iron Man 3 takes place around Christmas when it’s clearly a big-budget early summer release. It really just adds some snow and Christmas lights to the scenery in places.

You can’t talk about Iron Man 3 without addressing the amazing special effects. At this point, most moviegoers are jaded to a certain level of expected special effects. I don’t think there was a scene in this film without some kind of visual effects, stunts, explosions or fancy camera work. It’s a testament to the work of the digital artists who pull off all kinds of visual trickery. The destruction of Stark’s Malibu mansion that’s actually featured in the trailer goes on for many minutes in a jaw-dropping sequence. The level of detail carries over to the Mark XLII version of Iron Man’s suit. It forms to Stark’s body piece by piece, which is a pretty neat method for suiting up as long as the pieces are within reach. The people who carry the Extremis virus have one of the strangest transformations as their skin cracks and glows like lava were bubbling through. They clearly spared no expense in making Iron Man 3. Even War Machine gets a paint job in red, white and blue to become Iron Patriot, a more politically correct name for the times. The only weakness in the technology is the bland and useless 3D conversion. Iron Man 3 proves that 3D is unnecessary for the enjoyment of a well-made film. Unless a movie is designed from the ground up for 3D technology, I see no point for this format. I wish people would intentionally avoid 3D movies altogether but certainly 3D conversions at least.

The level of humor and all-around entertainment in Iron Man 3 are high. Stark has a lot of the best lines, but Hogan, Potts, Rhodes and others are fast on the draw as well. I won’t spoil it for you at all. One character does a complete about face in the movie in one of the many surprises, and that reveal is worth a number of laughs. The humor also acts as a respite for some quite intense, violent sequences. Iron Man 3 is rated PG-13, but I’d call it a “hard” PG-13. I would not recommend it for young children. I wouldn’t normally comment on violence, sex or adult content in films, but there were a few children of five years old or less sitting near me at the screening who covered their eyes or turned away during many scenes. The pinnacle of the humor was a great line to add to my short list of unusual but memorable movie lines. “Grab your monkey” from Iron Man 3 joins “Trust the fungus,” “I got towels” and “Put the bunny back in the box.” Guess those movies! (I put the answers at the bottom of this review backwards in white text in case you don’t want to cheat. Just highlight the lines to see the answers.)

Iron Man 3 is a rather long film that keeps you involved from start to finish. (Yes, there’s a bonus scene after the credits, so stick around.) I never felt bored because the story was episodic and held surprises to make it like plots from a few comic book issues brought together into one experience. I don’t know if Iron Man 4 is on the schedule past the current batch of Marvel movies, but if it’s not, I’d welcome anything that involves Black as director. Iron Man 3 starts off a summer with lots of big-budget movies around every corner, and it will be my yardstick to measure them all.