Yesterday the entire family went out together to see Iron Man starring Robert Downey Jr. As is the case with a lot of the Marvel and D.C. superhero movies, not being a comic book fan, I’m not all that familiar with most of the non-A-list characters. I’d never heard of Iron Man prior to the hoopla that surrounded the making of the movie. 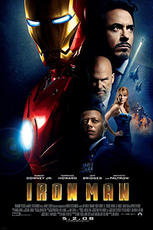 To be frank, I hadn’t planned to even bother with this until it got a 96 on Rotten Tomatoes. Of course that high a rating has been the kiss of death for a number of recent (and not-so-recent) movies for me. Regardless, we saw it all the same.

The movie is very similar in feel to the remake Batman Begins. The first half of the movie goes into great, and compelling, detail about how the Iron Man comes about. The movie is able to poke fun at itself without going overboard and also handles the story seriously without taking it too seriously. That’s not the easiest thing in the world to balance. The second half is loaded with exceptional action and special effects. The flying sequences are quite spectacular.

Everyone in the movie does a solid job. Downey Jr. has always been a brilliant actor and here he proves to be a perfect fit. The two other noteworthy participants are played by Gweneth Paltrow and Jeff Bridges. Bridges was a bit interesting as it was a somewhat shocking to see him so gray in the beard and so bald on top. While I’m sure that’s a shave job, it still made him look ancient and I’m just not ready for an ancient Jeff Bridges yet.

Be sure to stay past the credits for an additional short scene. In the end the entire lot of us really enjoyed the movie. It’s great fun and I look very forward to the next inevitable installment.

We saw the movie at a theater we rarely get to. For Christmas a family member got us a gift certificate to Regal Cinemas. Thankfully there’s one down the road from my in-laws so we decided this would be a good chance to finally use the card as we’d be visiting for Mother’s Day.

It’s not my favorite theater and, compared to my local favorite theater, generally has a less mature audience. On the plus side, the theater was nearly empty for this particular early showing. There were only about 18 people in all. Ironically enough the previews were loaded with reminders to turn off all cell phones. We actually thought it was a bit overdone. I should have realized there was a reason for it. About half-way through the movie a father sitting next to his young son, off to my left in the row in front of us, took out his cell phone and started texting someone. He then proceeded to keep it up for roughly 10 minutes when I finally had my fill. I walked up behind his seat, leaned down and said, “Excuse me but could you please put your cell phone away. We’re trying to watch the movie.” His response was, “What? This is bothering you?” When I told him it was he said, “Go sit down. This isn’t bothering you.” I then asked again and noted that if he didn’t turn it off I’d involve the authorities for causing a public disturbance. To that he started to rise from his chair and clench his fist. It was then that I realized this guy was LARGE. Thankfully about halfway through the process of turning to face me, he looked at his son and thought the better of it. He sat down saying, “Don’t walk up behind me like that again.” I reminded him of where I was sitting and said that I really didn’t have much of an option with regard to how I approached him.

I have no doubt that had his son not been there, we’d have had an all-out brawl right there in the theater. This sort of lack of common decency has got to stop. When is it going to sink in with people that texting is no better than getting or taking a call and often is worse? You’re sitting in a DARK theater people with a device that is back-lit with a bright light that illuminates your entire area and can be seen throughout the whole theater. I seriously thought about pelting the guy with popcorn and then when he complained respond by saying, “Oh, you mean this is distracting? I’d have never guessed that.” In fact, I’m thinking that theater goers should start a campaign of this type. If some people are going to be so rude as to interrupt us we should all start pelting them with harmless popcorn until they get the point. Let’s start a new trend of our own.