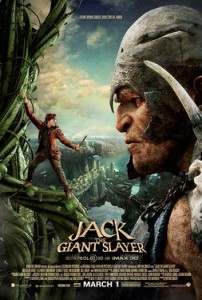 Who knew that the summer movie season would start so early?! Most of the big-budget, special-effects films are saved for the period from Memorial Day to Labor Day. Lately, the trend has been to push the boundary of this season to early May. Jack the Giant Slayer marks a surprising change for 2013 to get this ball rolling even sooner. Perfect for a holiday weekend release, this movie really surprised me and completely entertained me from start to finish. You want giants? They’re here in hordes. You want romance, adventure, action and great characters? That stuff’s all here, too. I expected a souped-up version of a fairy tale and got a more complete story and motion picture that had me cheering, laughing and dropping my jaw at some of the sequences for the first time since The Hobbit: An Unexpected Journey.

Director Bryan Singer has taken on bigger and bigger productions over his career, and this may just be the most ambitious. He delivers on every level. I was worried when I saw a trio of writers that the story would similarly be unfocused. Fortunately, Darren Lemke (cowriter of Shrek Forever After), Christopher McQuarrie (writer of The Usual Suspects and Jack Reacher) and television series writer Dan Studney collaborated as if they were three heads on the same writing monster. The story incorporates the traditional fairy tale and shows us what might happen in a world where that legend is common knowledge to children. This isn’t the Once Upon a Time version, either, with a single giant and a simple plot. The filmmakers used the fairy tale as a base and built their own narrative beanstalk on it with branches going in all directions.

Nicholas Hoult (also currently in Warm Bodies) stars as Jack, a simple farm boy who spots Princess Isabelle (Eleanor Tomlinson) when she’s slumming it in disguise as a commoner, and he catches her eye as well. Before Jack can get out a word, Isabelle is whisked off by her protector Elmont (Ewan McGregor) back to her father, King Brahmwell (Ian McShane), and other members of the court that include Crawe (Eddie Marsan), Wicke (Ewen Bremner) and the villainous Roderick (Stanley Tucci). With Ewan and Ewen, that makes a partial Trainspotting reunion! Isabelle’s restlessness and Jack’s foolishness in trading a horse for some beans leads to that giant beanstalk growing out of the ground under Jack’s house and taking Isabelle up into the clouds. Jack joins the king’s men on a journey up the beanstalk, but little do the men know what they will find up there.

Humor is a major part of Jack the Giant Slayer and perhaps may explain why it’s so much fun. The king and his men are serious and tough when they need to be but otherwise crack jokes and deliver one-liners like the best action films. There’s a nice cameo by little person actor Warwick Davis, who somehow doesn’t look much older than he did in Willow. One of the opening production company intros makes a nod to The Usual Suspects with a twist that shows you the attitude of the film from the start. This humor translates to the variety of giants as well. Most of them are rather oafish, but leader General Fallon (voiced by Bill Nighy) also has a second head (grunted by Crypt Keeper voice actor John Kassir) that makes for the most amusing interplay this side of Abby & Brittany. A famous fairy tale line takes a different turn as there are actual giants named Fee, Fye, Foe and Fumm.

Jack the Giant Slayer entertains with its humor and characters, but it absolutely astounds with the special effects. After a few minutes, I just gave up trying to separate the real from the computer generated. Scenery and actors are mixed with graphics so well at this point that you can’t tell what’s filmed and what’s on a green screen anymore. The growing effects of the beanstalk are breathtaking. The beanstalk is a world unto itself. I’ve always had a problem with this part of the story because it’s never fully described how tall the beanstalk would be and why there would be a world that you can’t see high above the clouds. They touch on this here with the climb up the beanstalk seemingly taking a day or so, but they do play fast and loose in some ways with how quickly people can make it up and down the beanstalk. The giants are big, loud and disgusting, and you get to see close-ups you never wanted to see. Their world is amazingly detailed and feels as real for them as the villages and castle do for the humans. What’s surprising to me is that the special effects are used to tell the story rather than show off yet they still provide a rich, fully realized visual feast. If the giants hanging around their castle aren’t enough, the battle and fight sequences raise the bar with trees and boulders flying overhead.

I don’t often appreciate 3D because it’s ultimately a gimmick to take more money from audiences for minimum return. This is one of those movies where it actually adds to the experience with the neat height perspective between humans and giants and scenes that take place at various levels up the beanstalk. More importantly, this film begs to be seen on a theater screen rather than in your home on DVD or on demand. If you get to it on an IMAX screen, that’s even better. It’s that perfect mixture of fun and spectacle that requires a night out. Jack and Isabelle make a cute couple, so there’s a bit of fairy tale romance here, too. If Jack the Giant Slayer is a sign of the major movies that are yet to come this year, then it’s going to be a very good year. For now, this film is the two-headed giant of movies, and it’s going to take a lot to knock it out of the clouds.