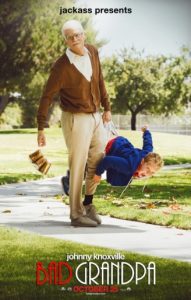 A crass old man in his mid-80s travels the countryside with his young grandson in tow, tormenting and shocking everyone they meet in the new hidden-camera reality movie Jackass Presents: Bad Grandpa.

Billy is also anything but innocent himself, and the two travelers harass virtually everyone they meet. It’s the ultimate tag team of unexpected extremes. Every stop brings one chaotic disaster after another, including crashing a wedding, robbing a convenience store, defacing a diner and even desecrating a funeral viewing — to name a few. 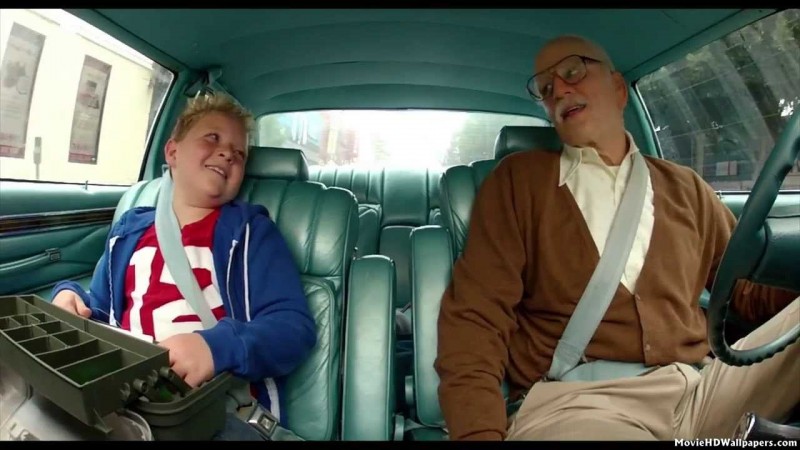 The film is from the makers of the Jackass movie and TV series in which Irving is a recurring character. Here we get a Candid Camera-like treatment of skits where everyday people have no idea they’re all part of an elaborate joke. The scenes are filmed with a multitude of hidden cameras recording the blunt responses of the victims.

This is puerile humor at its basest. Penis jokes, flatulence, horrendous manners, nudity and anything else of even remotely potential shock value are served up for someone’s intended viewing pleasure. I’m not entirely sure who that is, but I am pretty confident that I’d find a coherent conversation with such a person to be quite an unlikely outcome. I’d have an easier time discussing the details of Uranus with Beavis and Butt-head.

The biggest problem with the film is that it fails at the very outset to convince us that Irving and Billy are anything but actors entirely in on the joke. This could have been much funnier if, for even a moment, we were able to buy into the story. It certainly can be done. Sacha Baron Cohen‘s portrayal in Borat jumps immediately to mind. It had similarly juvenile humor but without the stark disconnect. You also get a sense that many of the film’s victims aren’t as out of touch as portrayed.

There are some funny moments, but they’re all as cheap and ultimately unsatisfying as being tickled. You laugh because it tickles — but only for a moment — and then the moment’s gone.