Okay, I got a little behind on some movie reviews so I need to get to these before they’re totally irrelevant. I’ll post them individually just in case I get side-tracked. 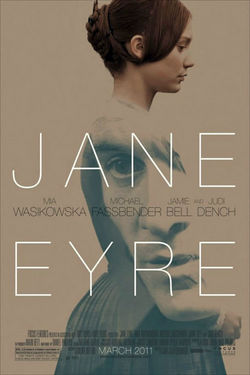 I caught Jane Eyre. Here’s a classic work of literature that’s been told several times in various forms and I’ve managed to miss them all. However, the previews for this retelling looked pretty darned amazing. I couldn’t imagine how I missed such a novel period piece—or so I thought.

The entire first half of the movie moved along at a rather slow pace and had me thinking it wasn’t going to get any better. The acting was solid. The look was dead-on for what I expect in this sort of period piece but the plot just didn’t seem to want to join the rest of it.

However, once it started hinting at the finish I couldn’t look away. I sat there mesmerized by the sudden course change and hoped it wouldn’t let up. The finale is just fantastic and made the rest of the journey worth the investment. Mia Wasikowska plays Jane and turns in a noteworthy performance. She’s also the lead from Alice in Wonderland, in which she was the only bright spot and already looks like she’ll be a major force over the coming decades.

Everyone else in the film comes off admirably including Michael Fassbender and Judi Dench.

My only real qualm with the movie is the trailer that really made this look like a thriller/horror film and it’s certainly neither. It did get me into the theater but I kept waiting for these elements in vain. As for the rest of it I’m so glad I went into this mainly blind. I had no idea what the plot was leading to and I think that helped immeasurably. I can’t speak to other versions of this story but this one certainly works for me.

The most curious thing about the movie is that virtually no one is seeing it so that’s got me wondering about other versions of the story. Are they far superior to this one? If so, I don’t see how they’re not talked about endlessly.