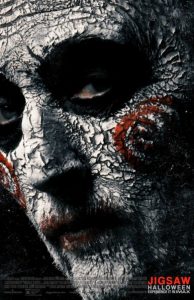 Halloween provided the treat of a new Saw movie from 2004 to 2010. The Saw franchise received notoriety for the creative traps that the movies’ villains set for their victims. The fans demanded more until the series fizzled out. I thought that would be it, so I was surprised when I heard about a new movie in the series. Could the filmmakers come up with some acceptable way to revive the dead series and perhaps its main character? Fans will feel at home with this latest entry. Jigsaw reminds me of a newly bought picture puzzle where the pieces have the same shape and familiarity but the image that they produce is different.

The production of the film got under way when German directors Michael Spierig and Peter Spierig (writers/directors of the Ethan Hawke-starring Predestination and Daybreakers as The Spierig Brothers) approached producers with a novel way to reboot the series. I’m surprised that a sequel didn’t pop up sooner with the high profit-to-cost ratio of the series. Writers Peter Goldfinger and Josh Stolberg previously penned Sorority Row and Piranha 3D, so this filmmaking team was perfect for delivering another horror flick. The plot ultimately acts as a race against time as bodies start popping up in unusual places and they look like they were part of an elaborate trap put together by John Kramer aka Jigsaw (Tobin Bell). Detective Halloran (Callum Keith Rennie) and Detective Keith Hunt (Clé Bennett) unearth clues that point to the handiwork of Jigsaw despite the man’s death a decade earlier. Is there a copycat killer on the loose, or did Jigsaw somehow fake his own death and return to strike again? That question lingers over the movie, and the revelation of the answer should satisfy the most ardent Saw fans.

The Saw formula introduces one or two major actors, and everybody else serves as possible fodder for the death traps. Jigsaw is no different with Rennie’s vast body of work and Bennett’s familiar presence on a number of TV series over the last decade. The two leads bring a strong grounding presence to the film. I was surprised to notice Laura Vandervoort of V and Smallville as one of the hostages. Perhaps she wanted to go undercover here, too, because she abandoned her normal blonde locks for a more natural brunette look. Those actors caught in the various traps do a lot of the heavy lifting as far as acting in the Saw films. Vandervoort and her cohorts Paul Braunstein and Mandela Van Peebles convincingly convey their terror, while Matt Passmore and Hannah Emily Anderson also make their mark as forensic pathologists. Bell’s overwhelming presence in these movies ties them together, if not by sight then by his instantly recognizable voice that taunts the victims. I would love to have him record my voice mail greeting.

Two common elements in the Saw franchise are the creepy clown puppet (sometimes on a tricycle, as in Jigsaw) and the deadly traps that work like Rube Goldberg machines. The clown puppet with Jigsaw’s voice strikes terror in the victims when it first appears in person or on video, and audiences react the same way. Although the traps are designed to be painful forms of torture, there’s always a way out for those caught to test how much they want to live. Some make it out more appreciative of life and perhaps maimed or scarred, and others simply perish violently. Jigsaw introduces an ingenious set of traps that feel almost like running the gauntlet for those involved. Starting off with the hostages wearing buckets on their heads connected to chains that draw them closer to multiple buzz saw blades, much blood spills in Jigsaw. Over the course of the series, the filmmakers tried to outdo the previous movies, and I’m pleased with these new inventions.

Unpredictable plot twists are another hallmark of the Saw series. I will defend the first film as having one of the best twists in all filmdom up there with the ones in The Sixth Sense and The Usual Suspects. Jigsaw doesn’t rise to that level, mostly because its predecessors took up a lot of the options as far as ways to involve Jigsaw in a twist. Still, you’ll chuckle when the pieces of this Jigsaw puzzle fall into place and the final frame goes black before the credits. Although I thought of many possibilities while watching, I simply didn’t see this one coming, and neither will you. Just go along for the ride, and you’ll probably want to immediately see Jigsaw again, which will be a different experience once you know what happens.

Is this the end of the Saw series? I doubt it. I’m not itching for another movie as soon as next year, but if the plot lives up to some of the others, I’d welcome another sequel. Too much of a good thing tends to turn you off to it. I like those restaurants that serve miniature versions of their signature desserts. You can get just enough of a taste without overdoing it. Jigsaw satisfies on that level, and if you ever come across another film in the series, you’ll be likely to bite into it. 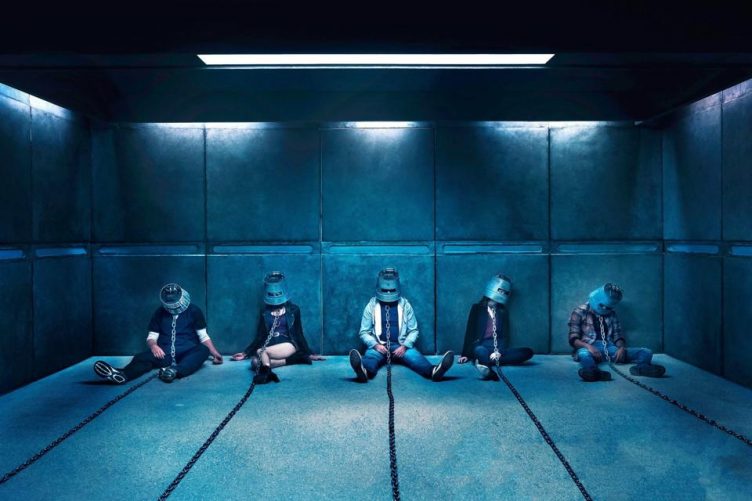