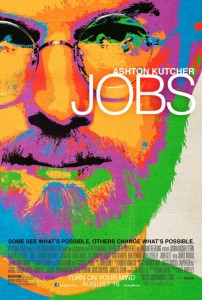 The enigmatic college dropout rises to become one of the most respected (and feared) business leaders in history in Jobs.

Steve Jobs (Ashton Kutcher) was a force from his earliest days. Never one to play to social norms, Jobs moved to the beat of his own internal drummer. He had the gift for visionary thinking outside the limitations that hold back even the best of the rest of us. Jobs starts off in the early days with Jobs sitting in on college classes long after he dropped out. Official transcripts took a backseat to learning the material, and it was that type of eccentric but hard to argue sense of logic that served Jobs so well.

Along the way, Jobs befriends the technically talented Steve Wozniak (Josh Gad), who has the engineering skills to deliver on Jobs’s vision. They, along with a few other friends and contacts, take over the family garage and create what would one day grow into the mega-company that is Apple.

The film explores much of the more pertinent milestones in Jobs’s life from that simple beginning all the way up to the introduction of the iconic first iPod. As Jobs, Kutcher not only looks very much like the man, but he also conveys many of his key mannerisms. Gad is a bit out of place as Wozniak initially but wins over the audience with an impressive performance. It’s clear that the producers took great pains to find actors who looked very much like their counterparts. Thankfully, all of them can act as well.

The elements beyond the casting create a number of key concerns. 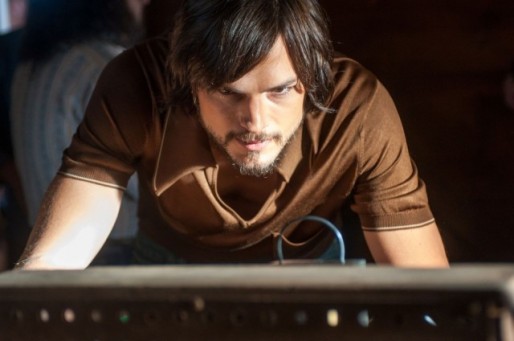 The first — and biggest — falls on Kutcher and the writers. They present the outward Jobs but never give us any insight into the inner workings of the man. We never get a sense of what really makes him tick. All we see is the end product. It should be noted that Jobs was an enigma to most. Few people understood him, and that’s what made him the mystical figure he was. The best that Kutcher can do is present us with Jobs’s intensity, which he does quite admirably. However, it’s not enough. Later, when we get a scene involving his wife and kids, we’re at a complete loss to understand anything about what he’s thinking as he contemplates his life.

The story also fails to connect a number of key pieces. The start of the film introduces us to Jobs’s closest friend Daniel Kottke (Lukas Haas), who continually discusses their future. They spend all their time together, including a transcendental trip across India. Suddenly, without any introduction or explanation, Jobs is working with Wozniak to create Apple. How they met and why he’s reached Jobs’s inner circle is a mystery. We also learn that Jobs has a daughter he wants nothing to do with and fights to disavow. When Jobs creates the precursor to the Macintosh — the Lisa — the audience is left to guess if it’s named for his unwanted daughter.

Even the soundtrack falters. It’s loaded with wonderful songs of the era but they’re all presented in a way that just doesn’t work.

There’s much to like about the film, and for younger viewers who didn’t live through the early years of Apple, this plays as a highly inspirational tale with a very likable, if quirky, visionary. It gives current Apple fans a real sense of why Apple is so different. For those of us who lived through those years or who know Jobs’s story, it’s not quite as effective. The TV film Pirates of Silicon Valley did a better job with Jobs.