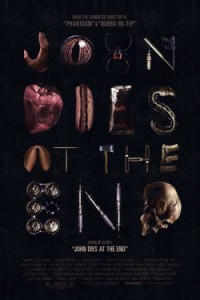 You would think that a movie called John Dies at the End would be able to live up to its cool title, especially when the trailer for the film warns you not to give away the plot. Unfortunately, the trailer for the film is more enjoyable and exciting in its short running time than the plodding, directionless movie overall. The only elements that kept this from dropping to a one-star review are the capable but hammy acting and the good special effects. If they weren’t there, this would be an all-around mess. As it stands, this story probably worked better as an absurdist novel.

Writer/director Don Coscarelli has a good pedigree and cult following with previous favorites Phantasm and Bubba Ho-Tep. Those films found a perfect mixture of camp and horror. In an attempt to adapt David Wong’s novel of the same name, Coscarelli has lost his way, his touch or both. Dave (Chase Williamson) meets with skeptical journalist Arnie Blondestone (Paul Giamatti) in a Chinese restaurant in Sherwood, Illinois, to relate what has happened since he and buddy John (Rob Mayes) discovered this street drug referred to as “Soy Sauce.” The effects of this drug are that it sends its users through time and space and essentially causes hallucinations. The Soy Sauce appears in various forms as a liquid (in syringes), spiky globules and winged pills that look like flies.

The trippy plot doesn’t have much cohesion as Dave tries to find out where John has disappeared to after taking some Soy Sauce and Detective Lawrence Appleton (Glynn Turman) tracks down the duo after bodies start showing up. I can’t begin to describe the plot after that because it’s all over the place and involves such bizarre scenes as meat coming together to form a giant Meat Monster better than Lady Gaga’s costumer could ever have made and another reality where Dave and John are worshipped as gods by topless people with animal masks. Phantasm icon Angus Scrimm appears in one scene as Father Shellnut, and Clancy Brown hams it up as celebrated psychic Dr. Albert Marconi. Why does Roger North (Doug Jones) randomly appear? Why does Amy Sullivan (Fabianne Therese) have one hand? I have no real answers to these questions or why there’s a giant monster named Korrok in the Mall of the Dead.

This is one of those movies that would be destined for midnight movie cult status if it were any good. I’ll admit that I was amused by the Meat Monster and the moustache that flew around like a bat. Williamson gives a wide-eyed performance that sells the wackiness and terror. Giamatti is evidently a big fan of Coscarelli, but he doesn’t do much more than his usual frumpy character. By the time that Dave and John reach the aforementioned topless place, you’re prepared for anything and perhaps in a hurry to reach the end and see if John really does die. I’ve seen the film and paid attention, and I won’t even try to decipher the title. This all would have been better if Coscarelli just added some of the flying spheres with knives from Phantasm.