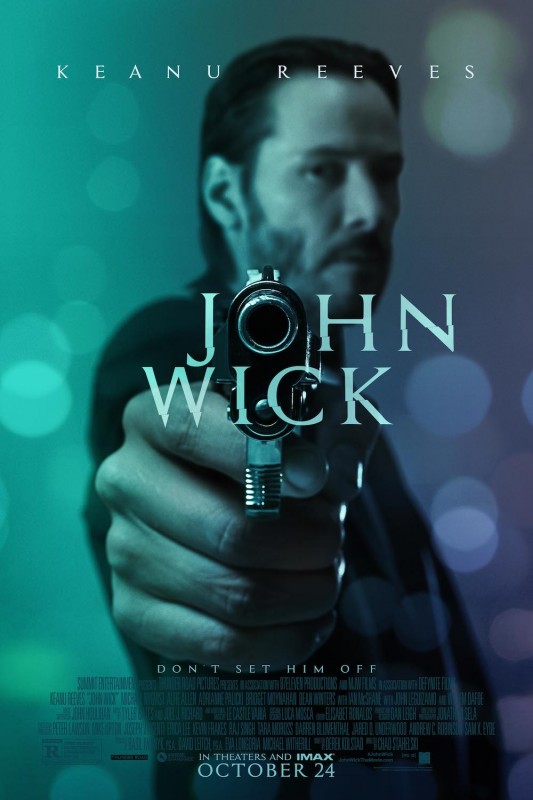 I have followed the career of Keanu Reeves like most moviegoers from Bill & Ted’s Excellent Adventure to Dracula to Speed through The Matrix and beyond. Hell, the guy even played Siddhartha in Little Buddha for the few of you who actually saw him in that movie. He’s got an impressive list of films. Although he may not be the best fit for a movie like A Walk in the Clouds, stick him in something like Johnny Mnemonic or Constantine, and it just works. Reeves recently turned 50 years old. He might be too young to join one of the sequels to The Expendables, but he’s not done with some of his more strenuous work in action films, either. I knew nothing much about John Wick before attending the screening other than its star, so I was a perfect guinea pig for the director’s experiment with the current version of Reeves. With the right blend of action, humor and perfectly timed music, John Wick places the titular character in impossible situations and believably shows how a vulnerable but talented man somehow deals with the danger.

Director Chad Stahelski and producer David Leitch have lots of experience as stunt coordinators, and that shows in all of the major action scenes as well as simple things like how characters hold a gun. Writer Derek Kolstad was a writer and cowriter respectively for Dolph Lundgren films The Package and One in the Chamber, so he certainly has the language down for this kind of movie. John Wick (Reeves) is clearly someone with a past who keeps to himself in New Jersey near New York City. His beloved wife Helen (Bridget Moynahan) recently died, and John is in the process of rediscovering himself when an attack on him in his house sends him on a path of retribution for the rest of the movie against Russian mobsters led by Viggo Tarasov (Michael Nyqvist of the original trilogy of The Girl with the Dragon Tattoo) and his bratty son Iosef (Alfie Allen). The film starts slow as you get to learn about John, his past as a hit man and his abilities, but once it picks up, it’s nonstop action all the way to the finale.

Reeves has certainly raised the action bar high with The Matrix and its sequels, so there’s almost no point in making a comparison. This action is rooted in the real world, and it’s gritty, bloody and imperfect. Reeves gets wounded in just about every fight, so the battle scars remind you of the earlier scenes and also hint at the fact that this is an older Reeves who should probably graduate from action films. He put in the months of training to be convincing, and I’m impressed with his performance. If Reeves continues to make great choices like John Wick, I look forward to the next titles on his schedule. With his deep voice and deliberate way of delivering lines, Reeves would not fit well in a bubbly musical. He should search for roles like this one and just accept how he fits into this niche.

The supporting cast perfectly complements Reeves and the actors for the lead Russian bad guys because many of the familiar faces are limited to only a few scenes, almost akin to cameos. Dean Winters is Viggo’s whiny assistant Avi, and he steals just about every scene when he’s allowed to talk. There is just enough of Willem Dafoe as a mysterious character to make me want a little more. Adrianne Palicki, Ian McShane, John Leguizamo and Lance Reddick all play people from John’s past who pop up for various reasons, and a lot of humor goes along with their scenes. Don’t blink, or you’ll miss Randall Duk Kim in a minor role. The story smartly cycles the supporting characters in and out as they punctuate John’s mission and bring their own personalities to this peek behind the curtain of hit men and their world.

Most people only care about the action sequences. They do account for a large percentage of the screen time. The filmmakers create their own style here, and the action is never stagnant and dynamically moving forward through the environments right beside John. In many ways, the vignettes play out like a video game, so if you look at the film from that perspective, there are quite a number of levels. Although rain is prevalent throughout, thunder and lightning only interrupt and mark the time of one fight. I was more enthralled by the music that accompanies each battle. You can’t help but get excited as techno music pumps through the speakers in a club and perfectly follows the ebb and flow of the action. This kind of synchronicity repeats throughout the movie and involves music from Tyler Bates and Joel J. Richard as well as Marilyn Manson’s “Killing Strangers” and other songs. It’s nothing new to have music in time with the action, but the filmmakers use that technique quite effectively here to the point where I felt within myself the beats of the music and the flow of the action as they played off each other. 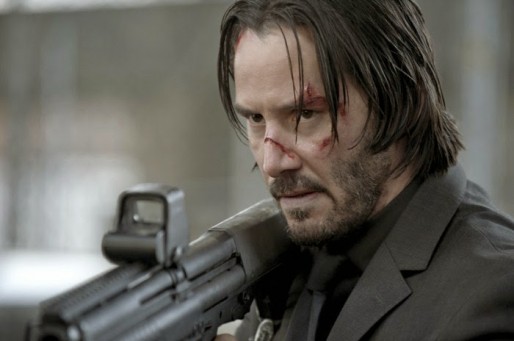 The intentional comedy perfectly lightens the mood at many points in the movie where it’s needed. Much of the humor has to do with John’s talent and how other characters react to him or his threats. John’s legendary skills remind me of the abilities of characters played by Liam Neeson in the Taken series and Denzel Washington in The Equalizer. The difference is that most people are smart enough to get away from John as fast as possible. The Russians refer to him as “Baba Yaga” or “The Boogeyman,” and Viggo knows that he means business. I love the mythology that the filmmakers created for this film with gold coins that have various uses and a hotel where hit men can take a breather. Those elements elevate John Wick above other action flicks into a place where I would like to see more stories set. I’d be interested to learn more about the hotel and some of the other characters in it.

Despite my overall positive recommendation, I still found a few things that I didn’t appreciate that took my rating down a notch. I’m not fond of the storytelling technique in the opening segment. I found it to be a cheap way to catch my interest when the rest of the script did that well enough. In one scene, men with flashlights on their guns attack in the dark. That really makes no sense because it’s too easy to then find them and pick them off. John’s memories flood back in cuts so quick that you can’t focus on them. I’d rather see one or two solid memories that mean something. This is all nitpicking because the filmmakers made their mark with this flick and picked Reeves as the perfect star. John Wick is one of those movies that I would gladly watch again for both its action and its humor.