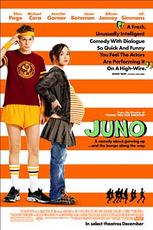 Tonight we finally got around to seeing the long-awaited Juno after seeing previews for it going back several months. It was absolutely worth the wait.

Once again we were a bit apprehensive as Rotten Tomatoes had it rated as a 94. As I’ve endlessly stated, movies that have universal appeal tend to be over-the-top in areas that simply do not appeal to average movie viewers like me.

I started out thinking this one was going to follow the trend as nearly all the funny parts of the preview were exhausted fairly early in the film. Thankfully the movie then continued on without missing a beat. One real concern is that the preview is a bit misleading. It portrays this as a fairly dark but solidly repetitive comedy and it’s certainly anything but that.

The movie is funny here and there but it’s much more a wonderful examination of real life and the variables that play themselves out when youth is confronted head-on by complex adult decisions. The acting is superb. Everyone is talking about it’s star, the young Ellen Page, as being a shoe-in for not only an Oscar nomination but very likely an Oscar win. I think that’s overstating it a bit. She’s wonderful but I’ve also seen some solid efforts aside from this one. The stand out in this movie to me is the ever-dependable Allison Janney. I believe this one should get her some consideration for Best Supporting Actress. My only gripe in the entire cast is Michael Cera whose appeal I am just not seeing. He fits this role slightly more than the one he had in Superbad but not by much. I will be entirely shocked if we find out later that this actor is heterosexual, not that there’s anything wrong with that. His kissing scene with Ellen Page’s character looked so ridiculously wrong that it stuck with me for most of the rest of the movie. He looked like he’d been asked to kiss and hug a radioactive mannequin. He’s either gay or loves acting gay in the movies. J.K. Simmons also does a wonderful job playing Juno’s dad. Also along for the ride are Jennifer Garner and Jason Bateman who both more than hold their own as would-be adoptive parents.

Anyway, this is a very enjoyable story with some real impact. It’s not for everyone as it is a bit dark and doesn’t fall neatly into a nice declarative bucket that many like. It’s not a straight comedy, straight drama, etc. It is what it is and that’s a good movie.