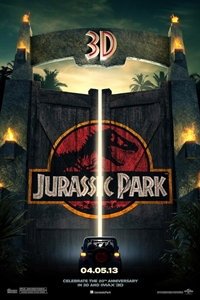 The epic Dinosaurs of 1993 are back from extinction, yet again saved by technology, and this time it’s 3D to the rescue.

Jurassic Park first dawned on movie screens exactly 20 years ago in 1993. Then, it was a stunning example of what technology could do for storytelling in a motion picture format. The effects were  at the time, nothing short of breathtaking. The story I’ve always enjoyed though it certainly has its hokey moments. The two kids add, for me, virtually nothing to experience and bring the impact down several notches. Without them it could have been a much grittier, much more serious film without losing any of the nearly patented Steven Spielberg magic.

Since this is just essentially a re-release of an earlier film the review will stick primarily to what’s changed. In this case that means focusing on the 3D elements and what it adds or doesn’t add to the experience.

When it comes to enhancing a film with technology the people at Industrial Light & Magic set the bar pretty high to start with. However, retrofitting 3D onto older films often brings with it problems. Thankfully the 3D upgrade is the best I’ve seen to date. It’s not flawless but it’s clear for most of the film that great care was taken with this iconic film.

Now virtually every non-effects-based scene pops and grabs you. Sam Neill as Dr. Alan Grant is far more convincing in the scene where he implores a young tourist into giving raptors the respect they deserve. There’s a new immersive quality to his reaching around with the raptor claw that wasn’t possible before. Laura Dern, as Dr. Ellie Sattler, jumps off the screen in 3D. Her stark coloring loves the effect and it makes her more omnipresent as a result. It doesn’t hurt that I’ve had a crush on her since childhood. Jeff Goldblum as Dr. Ian Malcolm, never looked so good. His intellectual dialogue gains a reality in getting more depth. You feel like he’s trapped you at a party and he wins you over in no time. The great Richard Attenborough also fares well. He seems softer now and you feel the grandfatherly appeal in ways you never did before. Several scenes that had little impact now grab hold unlike previously. The fly-over  of the two large iconic gates into the park feels epic with the accompanying joke about King Kong gaining resonance, for example. Flora and nearly all the landscape-heavy scenes also come alive.

This is the first time I ever felt that 3D came off as a superior way to present a film and it seriously made me wonder if we’re closing in on all films moving this way. Prior to this it felt like a gimmick that had either sort of worked or didn’t. This film loves it in all but one key case. Where is fails is almost every scene that involves the dinosaurs. The CGI ones are the worst. They suddenly feel like the flat, digital, non-living elements they are. It’s as if we’re watching a huge Colorforms set that sits behind the actors. Many of the scenes involving mechanical dinosaurs also, strangely, lose out. I think that has more to do with 20 years of advances. You can almost smell the latex when Dr. Grant lies on the triceratops to feel its breathing. Once you adapt to this reality the disbelief element fades and the latter T. Rex scenes feel less impacted.

You will encounter several quick scenes where foreground items are out of focus which seems to be a typical problem where the screen simply runs out of the ability to convey enough depth. Thankfully this isn’t all that distracting.

The overall effect works well with the film and does give it a bit more edginess. All in all it’s a great way for new viewers to see the movie. However, I suspect they’d better hurry as I doubt it’s going to be out for very long.