The world struggles to coexist with dinosaurs of every kind in Jurassic World Dominion.

It’s been four years since Isla Nublar, along with most of its inhabitants, was eradicated by a volcanic eruption, but as Dr. Ian Malcolm (Jeff Goldblum) stated in the first film, “Life finds a way.” Now, all manner of dinosaurs roam freely on every city street, wander through countless suburbs and fly across every sky. Making matters worse is a new genetically altered creature that’s destroying the world’s food crops, putting humanity’s very existence in jeopardy.

Dr. Ellie Sattler (Laura Dern) enlists Dr. Alan Grant (Sam Neill) to help her uncover the truth behind this potentially catastrophic genetic mutation. They suspect that a single firm, run by Apple CEO Tim Cook… Wait, that can’t be right. It says here that it’s run by a Dr. Lewis Dodgson, played by Campbell Scott, who just looks and acts a hell of a lot like the computer company magnate. If I were Cook, I’d be looking into my legal options. Anyway, while the doctors are off trying to stave off world hunger, Claire Dearing (Bryce Dallas Howard) and her beau Owen Grady (Chris Pratt) are focused on keeping their adopted daughter Maisie (Isabella Sermon) out of the hands of unscrupulous baddies looking to abduct her. Both groups’ efforts will be all the more challenging with deadly dinos popping in and out of their midst at every turn.

The sixth — and hopefully final — film in the Jurassic Park franchise brings together the core cast from both the original Park films and the latter World films, giving them both their own unique story lines. How’d it turn out? An errant large asteroid wouldn’t be enough to wipe away this mess.

The problems — there are so many — start with the two different stories. Just as you begin to garner what little interest there is to be gained in one story, the film jumps back over to the other, setting the “tension” back to zero. If you haven’t recently refreshed yourself on the plot of the most recent film — I highly recommend just reading it on Wikipedia over actually watching it — then you’re going to have an even harder time keeping up.

The film’s creators seem to have entirely forgotten what made the first entry so special — the magic and wonder of the idea behind it all. What they’ve produced ever since are sequels less like E.T. the Extra-Terrestrial and more like Godzilla. Been there, done that… to death.

Another major issue is the one that’s hardest to convey. Everything is just ludicrously unbelievable. Yeah, I get it. It’s a film about dinosaurs living among people, but hear me out. Even in such a world, there are realities that should hold firm. A few humans with a couple of tiny clubs shouldn’t have any chance of fending off a massive carnivorous dino hovering mere inches away. It’s impossible to suspend disbelief when the characters escape harm countless times in ways that defy any common sense. Things get so ridiculous that, in one scene, the heroes fight a battle in the middle of a frozen tundra and then emerge, moments later, in the heart of a tropical jungle. This story does take place on planet Earth, does it not? Global warming and the addition of extinct creatures doesn’t alter the weather that much.

It was nice to see the gang back together and mixing it up with the next generation, but you’d think that the writers could have leveraged that into a kick-ass combo. Nope. This is a series that is in desperate need of going extinct. 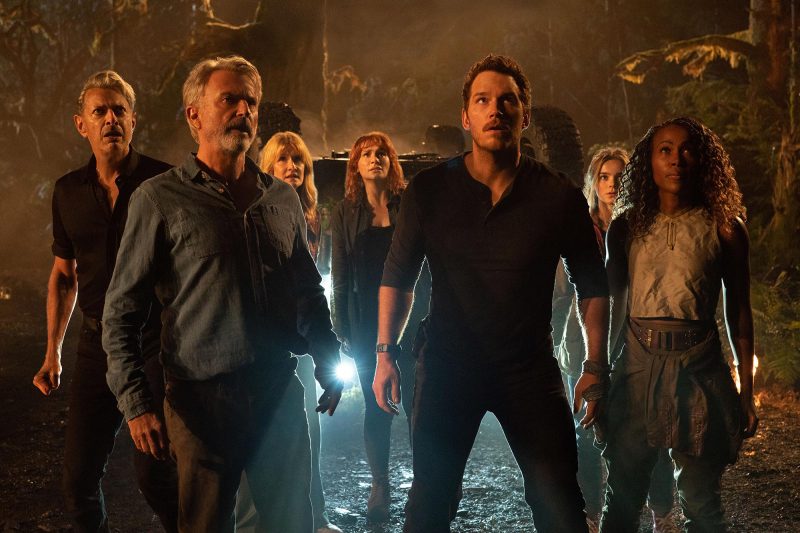