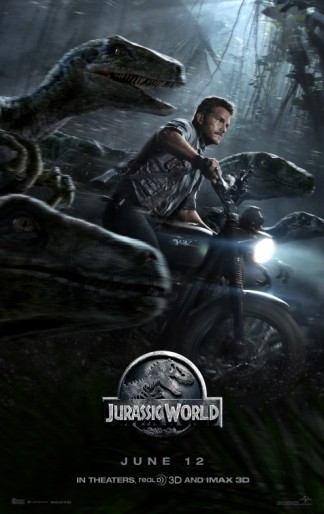 Certain movie scenes stick with you forever. Some are iconic for everyone like the finales of Casablanca or Gone with the Wind, and others are more personal. One of those scenes for me is the T. rex attack on the jeep in Jurassic Park. I remember seeing it the first time in a packed theater. I’ve watched this sequence many times, and it always impresses me with its perfect mix of sound, editing, rain and terror. Try as it might, Jurassic World entertains, but it just doesn’t have any truly memorable scenes like that. Its similar scene loses intensity because the two kids in danger are in a giant hamster ball, which is already laughable. So much in this movie feels like it’s recycled from its predecessors, and the skimpy plot is designed to go from one dinosaur attack to another. Jurassic World entertains when the angry dinosaurs are on screen and dulls at other moments, and that’s pretty much what I expected in this likely last film before the franchise goes extinct.

Director/cowriter Colin Trevorrow previously helmed the smart indie comedy Safety Not Guranteed, so he’s not exactly the kind of director I would entrust with this major summer blockbuster. Surprisingly, he impresses on all levels with his big-budget sophomore film. There are special effects in probably every single shot, and Trevorrow brings it all together in a watchable movie that makes the running time fly by. Where Jurassic World falls flat is in the writing. Cowriter Derek Connolly (Safety Not Guaranteed) and writing couple Rick Jaffa & Amanda Silver (Rise of the Planet of the Apes and Dawn of the Planet of the Apes) reference the past events on Isla Nublar off the coast of Costa Rica and then pretty much recycle the plot of the original film. Sure, there are some new twists like an actual trainer for the Velociraptors named Owen Grady (Chris Pratt), but it’s pretty hard to believe that anyone could put together a working, profitable dinosaur theme park given the failure of the first one, the remnants of which are somehow still hidden on the island instead of completely razed.

The thin plot has brothers Gray (Ty Simpkins of Insidious, Iron Man 3 and Insidious: Chapter 2) and Zach (Nick Robinson of The Kings of Summer) going to the titular theme park on Isla Nublar for Christmas break — yes, this is a Christmas movie, after all! — to spend time with their aunt, operations manager Claire Dearing (Bryce Dallas Howard with perfect bangs, a white suit and heels). Claire is too busy for her nephews, so she supplies all-access wristbands — suspiciously similar to Disney MagicBands — and her personal assistant Zara (Katie McGrath) to escort them. Of course, these stupid humans didn’t learn their lesson, so park owner Simon Masrani (Irrfan Khan) pushes Claire and her scientists for more exciting creatures to boost the sagging profits. The park has been open for 10 years, and they’ve now developed a genetically modified dinosaur called Indominus rex, which is a hybrid of T. rex, Velociraptor and a number of other secret ingredients. You know what happens next. The new dinosaur gets out of its enclosure, rampages across the island and creates a nightmare scenario that Claire and Owen try to contain while also searching for Gray and Zach. That’s when the movie turns into a version of Alien with everyone trying to both find and contain the monster, or “asset” as they like to say, that’s on the loose.

Howard, Pratt, Simpkins and Robinson get the most screen time along with the dinosaurs. All of the other actors are relegated to minor roles, including Vincent D’Onofrio as a security expert with a subcontractor and BD Wong as Dr. Henry Wu, the only returning character from the series. Jake Johnson (also in Safety Not Guaranteed) gets all of the laughs as control room worker Lowery. Omar Sy is practically lost in the jungle as Owen’s assistant. I usually like Judy Greer; she’s quite annoying as Gray and Zach’s mother. The heavy acting must have involved green screens and imaginary digital dinosaurs that weren’t there on set. Still, the four leads are fine. Fans of Pratt and Howard will get their fill. You know how people say that others “clean up real well?” Well, Howard and Pratt “dirty up real well” as the movie progresses. They both get dirty and sweaty, and that’s not from the awkward moments that hint of a deeper relationship. I still think it was a bad decision to have Howard outfitted in a white suit and heels. It just makes no sense that she would be able to keep that outfit so white and run so effortlessly. 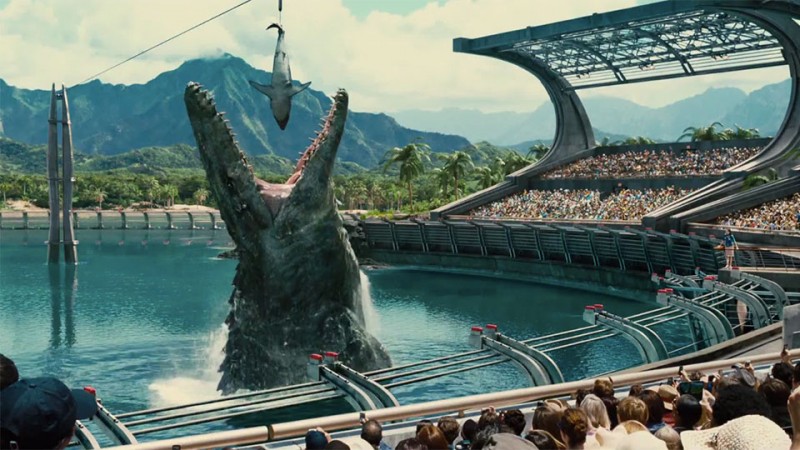 Let’s face it. This movie is all about the dinosaurs. The special effects are far more advanced than they were in 1993 when Jurassic Park hit theaters, so the combination of physical and digital effects is far more convincing. The Indominus rex is a great dinosaur villain, but they went a little too far into the ridiculous camp by introducing how certain genes affect the creature and its behavior. I don’t buy it. This isn’t a video game where you can assign traits to dinosaurs… unless they allow you to do that in the companion video games. The Velociraptors are just as scary and dangerous as in the past, so it’s particularly tough to accept that someone can possibly control them and turn them into heroes/allies. I’m especially happy that the pterodactlys as introduced in the first novel are fully realized here. Of course, the flock that gets free brings up another good point about why the theme park should have never opened.

What’s unclear in the dialogue and attitudes is why they built Jurassic World on the site of Jurassic Park and people don’t want to talk about the failed park. It’s literally crumbling right there nearby. Do they hope to actively ignore the past? Claire admonishes Lowery for wearing a Jurassic Park T-shirt to work. There are all kinds of questions about logistics in getting to the park and who can afford it. I guess I should just forget them and pay attention to the dinosaurs. There are plenty of scenes of “nice” dinosaurs — a kid riding on a baby Triceratops, etc. I would have much preferred an R-rated movie with nastier dinosaurs, but the death scenes are still pretty satisfying. Sorry, puny human beings, but it’s too much fun to watch you die.

Would I like to go to a theme park like Jurassic World? Sure. It’s another version of SeaWorld, I suppose, and I love those parks no matter what the dolphin and whale “protectors” say. This Jurassic World? I enjoyed the excursion and will likely return again before the summer’s out to watch this version of Dinos Gone Wild. Is this the be all and end all of the series? No. A better story would have made me so much happier. As with a great roller coaster, you endure the slow spots to experience the great drops, airtime and speed runs. Jurassic World will make you scream out loud, too, as it barrels toward its satisfying conclusion.