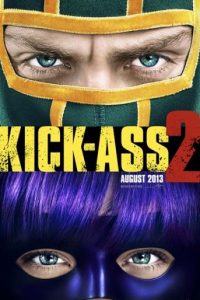 Three years after the original story, the heroes and chief villain have all had some time to grow up and evolve — for better or worse. Their efforts have paid off by empowering new would-be crime fighters to take up the cause and don their own superhero personas. As a result, Dave Lizewski aka Kick-Ass (Aaron Taylor-Johnson) has pretty much been able to lay low and focus more on being a teenager but still longs to get back out there. He ultimately teams up with a ragtag group calling itself Justice Forever, which is led by Colonel Stars and Stripes, played — to my complete surprise — by Jim Carrey.

Meanwhile, Mindy Macready aka Hit-Girl (Chloë Grace Moretz) has had a tougher time. Having lost her father — the original crusader Big Daddy — she’s now secretly carrying on his legacy. She spends her time skipping school and further honing her incredibly formidable skills as a masked crime fighter.

Bad guy Chris D’Amico (Christopher Mintz-Plasse), formerly the Red Mist, is finding everything tainted by the death of his own father. All he can think about is revenge, and it has only made his immaturity and bad temper worse. He decides that it’s time to become the ultimate super villain — The Motherfucker. If you think that’s bad, you should hear the names of some of his minions and their group!

Early on, the film feels very much like TV’s Buffy the Vampire Slayer. Fans of that show will feel right at home here. Non-fans will likewise find this all a bit over the top and silly. 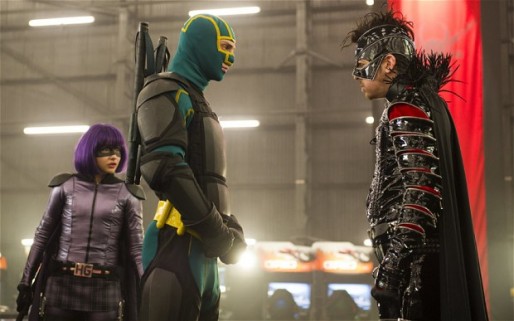 This installment is, from the beginning, absolutely loaded with adrenaline-packed action sequences, great dialogue with some memorable lines and more carnage than a meteor strike on New York City. I was also surprised to find a number of oddly darker moments that just work. There are some very nice, realistic emotional sequences that imbue the core characters with some real depth.

Be forewarned that this is a dramatic departure, in many ways, from the original. That film was a typical “origin” story where much of the energy and interest is driven by the background behind the characters. Sequels are free to then dispense with the details and jump right into the action, and that’s usually where they lose me. The key difference between this series and other comic book franchises is that, while this one does move beyond its origins, it stays true to the original where it matters most. We still get useful character development along with all the rest.

The acting is solid with great performances from the core players. Mintz-Plasse is absolutely wonderful as the antagonist.

You should also stick around through the credits for an essential closing scene.

This is definitely not a film for everyone. The language is crass, the jokes are bawdy and there’s enough gratuitous imagery to drive a teetotaler to drink. For everyone else, Kick-Ass 2 packs a guilty-pleasure punch that will keep you laughing and cheering throughout.