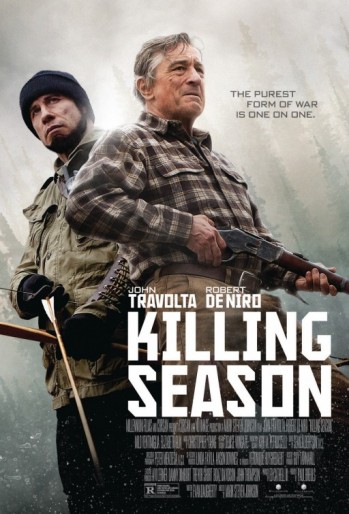 Rarely do I wish that a rumored casting decision favored the other person than the actor in the finished production. The Indiana Jones films would be quite different if Tom Selleck had put on the famous fedora. Even worse, Eric Stoltz was on his way to assuming the role of Marty McFly in the Back to the Future trilogy and had already filmed for a few weeks when he was cut and replaced by Michael J. Fox. In the case of Killing Season (aka Shrapnel), Nicolas Cage was supposed to rejoin John Travolta, his costar from Face/Off, for this masterpiece. That could have been an almost watchable version of this story because of the reunion factor. Instead, Robert De Niro plays the lead and makes me wonder how anyone could have convinced him to take this job. Killing Season is really a quite awful mix of bad acting, insulting plot points and too-obvious foreshadowing visual clues.

Director Mark Steven Johnson has had a mixture of quality in his work. He was the director of When in Rome and the writer/director of Simon Birch, but he was also the writer/director of Ghost Rider and Daredevil. Writer Evan Daugherty was the cowriter of Snow White and the Huntsman, so maybe that’s where all of the scenes in the woods got their inspiration. Georgia was the actual shooting location for some unidentified Eastern American mountains, and Sofia, Bulgaria, stood in for Belgrade, Serbia. In a brief prologue, NATO forces help end the Bosnian War with Operation Deliberate Force in 1995. During this mission, a few soldiers, including Benjamin Ford (De Niro), round up criminal Serbs and shoot them. In the present, Ben is a recluse in a cabin who keeps to his routines. Does he go visit his son Chris and daughter-in-law Sarah (Milo Ventimiglia and Elizabeth Olin in a couple of scenes), who just had a baby? No, Ben needs to be by himself in the woods, so a trained professional like him should be on high alert when a backpacker with an unusual accent named Emil Kovac (Travolta) shows up on the remote road near his house in the middle of a rainstorm.

That’s just the first of many ridiculous plot elements in this film. When Emil reveals the part of the world where he’s from, does Ben get as far away from him as possible and grab his gun? No. He takes him back to the house, and they drink a lot while endlessly listening to Johnny Cash singing “Don’t Take Your Guns to Town.” Killing Season is 90 minutes long with 10 minutes of slow credits at the end, so it’s pretty bad that it takes 30 minutes of the prologue and introductory scenes for the film proper to kick in. Emil proposes to Ben that they go out hunting together as old war vets before Emil turns the tables on Ben and starts to track and hunt him instead. Killing Season is nothing more than an excruciatingly extended final battle of the type you would see in any other action movie. Even worse, it goes back and forth with who has the upper hand and then blows it by talking too much or otherwise not just killing the other man and putting the audience out of its misery as well.

The plot isn’t the only source of pain during Killing Season, although the scene with De Niro peeing on his own wounded leg is up there in cinematic history. The filmmakers drop visual clues that almost stop the film dead in its tracks for the few seconds that they want some object to be obvious, such as Ben’s scar, a flare gun in a glove compartment or a picture of a church on a wall. The presentation of these details made me feel manipulated. A good director can include such things in the background without making them too insulting. A detail like Emil’s scorpion tattoo could have been handled differently than lingering the camera on it both in the prologue and in the present. A glimpse of the tattoo and some dialogue referencing it would have been enough. 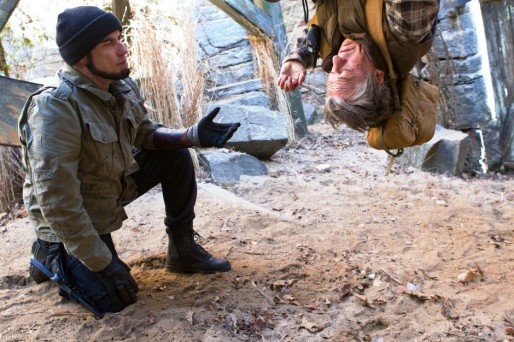 Worse than anything that I mentioned before are the examples of bad acting exhibited by Travolta. If you endured Battlefield Earth and Hairspray, among others, you ain’t seen nothing yet. In Killing Season, Travolta sports a strange, creepy beard along the edge of his face that makes him look like a member of the Backstreet Boys, and he uses a stilted, bad accent that even Bond villains would laugh about. This is why I would have loved to see Cage in this movie. His overacting with Travolta’s bad acting would have been a hoot that would be worth at least one more star in the rating. Conan O’Brien introduced a modified national threat level that abandons the color system for one that ranks amazing examples of Cage’s work. He needs to do the same for Travolta. There are many examples already available, and Killing Season just offers complete coverage for any crisis. De Niro is actually believable here. He can’t be blamed for the actions of his character even if Ben is forced to do at least three things that I think might be physiologically impossible for a human being, including something with the shrapnel of the alternate title.

I had no idea going into this movie that it would be so bad, but now you do. Some people search out such films; I usually stumble upon them. Nobody knew how bad The Lone Ranger was until critics and moviegoers alike saw the film in screenings and wrote about it, which still gave people enough time to avoid it in theaters — as they did. Killing Season was out for just a week and then went straight to video on demand and DVD, so very few people caught it in theaters. Consider yourself forewarned, and if you see Travolta on a dirt road in the middle of nowhere, head the other way.