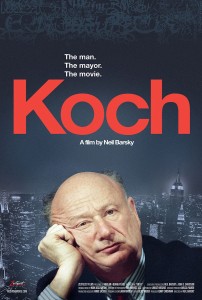 Ed Koch dominated New York City politics in a way no other politician of recent memory ever has. He first shot onto the scene as a congressman for New York’s 17th District in 1969 and then became New York City’s mayor in 1977 — a post he held for three terms before being defeated by David Dinkins in 1989. Koch was more outspoken, more magnetic, more intelligent, more controversial and more full of himself than possibly any other person to hold the job.

Barsky’s film attempts to delve into the background of the man to find out what made him tick and to explore his nearly 20 years in elected office. It takes us from the early days all the way through his highly successful early years as mayor and to the tough periods of his final defeat and reinvention as a post-mayoral celebrity and pundit.

However, it does this in a very disjointed way. Barsky, for example, provides year titles but then seems to forget that he did so. We’re told it’s 1977, but then we’re back in 1969 and then forward to 2012 and then back to 1984. The flashes back and forward only work against the goal of the film, and we get lost in the shuffle. The jolting shifts destroy any sense of building emotion. Just when you’re getting vested in a situation, the stage resets for another act.

There are also a few rather odd head-scratching moments where Koch is shown saying something to the camera that bears absolutely no relation to the current topic. Sometimes this is applied to entire scenes. We look in on Koch visiting family for a Jewish holiday, but we have no idea why we’re getting that insight at that moment. Nor does it really add anything of substance.

The story is told from both sides but with a heavy bias on the positives. Introspection is entirely missing. One of the biggest questions of Koch’s life — his sexuality — is dismissed as if Koch himself were directing. Key witnesses to his life are oddly absent, and it feels as if Barsky was left to tell an incomplete story for lack of access. You won’t hear from Rudy Giuliani,  Mario Cuomo or a host of others who could shed some interesting light on a life that we know was more compelling than what we get.

Koch died on February 1 at the age of 88, yet the film makes no note of his passing at all. While it’s clear the film was completed prior to his death, it still seems a bit odd to see no final mention of it.

All in all, the film touches on some aspects of Ed Koch you may not remember or know but didn’t really dig deeply enough into the inner man. There’s no real explanation of his own compass. Its haphazard presentation also results in a highly uneven, often flat analysis that fails to resonate.