A Norwegian adventurer in 1947 takes on the unthinkable by embarking on a 5,000 mile trip across the open ocean in a raft designed 1,500 years ago in Kon-Tiki. 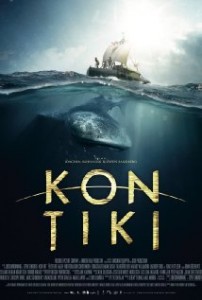 This is the story of famed adventurer Thor Heyerdahl‘s bold journey across the Pacific Ocean in a balsa wood raft of questionable design to prove his highly suspect theory that the ancestors of Polynesia migrated from South America and not — as anthropologists had long believed — from Asia.

The film, as told, is a captivating tale from start to finish. It’s a story about leadership and the true conviction of one’s beliefs. The film starts off by leaving little doubt that the young Heyerdahl, played wonderfully by Norwegian actor Pål Sverre Hagen, was a man of action. Once he set his mind to a task, it was sure to happen. Along the way, he came to believe that the indigenous peoples of the Polynesian islands were far more likely to have come from places east of their locations instead of west — as the prevailing theory went. He decided that the best way to prove his point would be to take designs provided by early Spanish explorers of Incan rafts and build one of his own using only materials available to the Incas. He’d then use the raft to make the journey himself. Most everyone he approaches for funding or to join the crew think he’s a crackpot. Eventually, Heyerdahl gets five extremely diverse men to join him on the journey, including one whose main vocation at the time was a refrigerator salesman.

Once assembled, the crew flies to Peru to build the raft and then head off on their epic journey. Just consider the sight of six clean-shaven, white, pale Europeans setting sail on a rickety, awkward-looking raft dressed in full suits, ties and dress hats. It seems the perfect picture of a doomed voyage. Along the way, they encounter more than Heyerdahl could have imagined, and the crew has to pull together to make it back to dry land safe and sound.

The look of the film is absolutely stunning with wide shots that breathe in the incredible vistas throughout. The acting is universally superb with Hagen evoking just the right personality to make it all work. The score is mainly relegated to the background but sets the right tone. There are also moments of pure thrills and emotional tension to give the viewer the impression of being another member of the crew and wishing they had a vote to turn back.

However, as I’ve made clear in past reviews, I can get very picky when a film starts off with the words “Based on a true story” as this one does. Heyerdahl’s story is from a relatively short time ago (1947). It’s a heavily-documented endeavor by the man himself whose own Kon-Tiki documentary won the Academy Award in 1951. The facts are easily checked and, sometimes, well known. When a film tries to present itself as representative of a person or experience, I believe it’s the obligation of filmmakers to try to do what they can to stay true to the facts. Unfortunately, history almost always loses out to creativity when money’s on the line. That appears to be the case here.

The most onerous oversight is that the trip in the film is full of action. There’s never a dull moment. Nearly everything that would create a challenge on the open ocean makes itself known in short order. What’s the problem? It’s well known that Heyerdahl’s actual trip was rather uneventful. That doesn’t in any way diminish his accomplishment. Simply having the guts to attempt what everyone believed to be a sure suicide mission is bold enough. Think about it. The guy traveled halfway to Australia from Peru on an untested raft. That’s pretty darned ballsy.

Another major disconnect involves the perception the film creates. It leaves the viewer with the clear idea that Heyerdahl had a theory and, through the experiment of the journey, proved the point. However, today his theory is widely considered to be complete nonsense unsupported by the facts. That’s a pretty wide chasm to just skip over.

With all such films, I end up with the same question. If the subject wasn’t so compelling, was there some other facet of the story that truly was compelling? In almost every case, the answer is a resounding yes. If that wasn’t the case, no one would know anything about these events. His determination and his ability to overcome the hurdles of embarking on the journey — and much of his life story — is extremely interesting. Just tell that story instead.

Taken as a story about leadership, teamwork and overcoming difficult challenges, this is a wonderful little film. (It was nominated for an Oscar for Best Foreign Film.) As a retelling of the actual journey, it fails miserably.