The latest interpretation of one of the most famous stories in literature and stage, Les Miserables,  comes to the big screen as a musical. It stars Hugh Jackman (Jean Valjean), Russell Crowe (Javert), Anne Hathaway (Fantine), Amanda Seyfried (Cosette) and more. 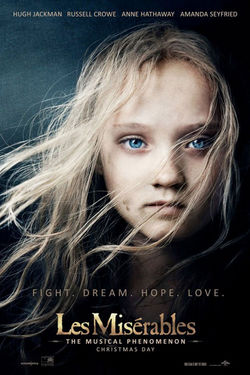 I will say from the start that I’m a big fan of the stage version of the musical and have major concerns over anyone who sees this as their first exposure to the story. This is an epic period piece that moves along at a rapid pace and covers decades of time. There’s little room to take a breath, as each musical number usually rolls into the next. If this isn’t something you’re familiar with, then this may prove challenging.

For fans of the musical the film version is different in critical ways, both positive and negative. The voice talent is spotty and almost none of the actors are up to the level of the stage pros. However, the acting and the cinematography allow for a much deeper level of immersion into the tale.

Lyrics and concepts that aren’t so clear in the play are crystallized by the crisper dialogue and fuller visuals. On stage, the lyrics fly by, especially when multiple people are singing, but in the film the technology is able to break down the complex audio with the deft use of close-ups and sound mixing.

You should also know that the producers obviously slowed down most of the songs for dramatic effect and the results are mixed. Many of the numbers, as performed, lack power to the point of the audience feeling the actors aren’t up to the task. However, as the film progresses the energy of the voices grows stronger. The slow cadence also means that some lines of the songs were dropped (to save time) and others tweaked.

One interesting impact is that your perspective of the characters changes. For example, in the play Jean Valjean is unquestionably a man of honor who made a fateful choice early in life out of necessity (and thus sets the stage for the main thrust of the story). In the movie version the acting presents us with facial expressions and body language that suggest a much more complex man whose ulterior motives aren’t so clear. Is that better or worse? I think it’s neither, but simply different.

Jackman plays Valjean in a way very different from what most see on the stage. He’s grimy, rough, beat up and, potentially unstable. Anne Hathaway, as Fantine, is surprisingly good. Her voice is acceptable but her acting makes up for any shortcomings. Amanda Seyfried might just be the perfect choice for the older Cosette. Her voice is extremely high and thin initially, but then you get a sense that it flies above the others, just as her character does.

The casting of the Thernardier’s was a complete surprise for me and I’ll leave the mystery there except to say that their roles are handled well.

The young boy, Gavroche, played by newcomer Daniel Huttlestone is incredible. He steals your heart from his first frame to his last. I wasn’t at all surprised to find that he’d already played the role on stage. It shows, and it’s wonderful.

The one role I feel that’s entirely miscast is Russell Crowe as Javert. His lines, also slowed, lose their impact. His voice feels wrong and you just can’t connect to the role well. I was always more aware of his being Russell Crowe than I was of him being Javert. That’s not a good thing at all. Thankfully it’s one of the very few missteps.

In the end, for me, this adaptation was a major triumph. I sat mesmerized by most scenes and was emotionally drained at the end. I was a complete wreck for the final act. Any film that can move you this much is a success in my book.