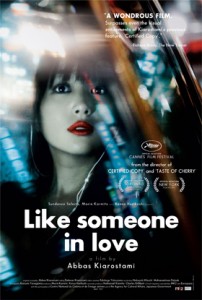 Detailed character studies are often like catnip for certain moviegoers. A movie of this type that’s done well can be a joy to experience in the right hands. If someone else flubs it, that kind of scrutiny can be exhausting to watch. Fortunately, Like Someone in Love is the work of a skilled filmmaker who arranges his scenes, characters and details with the utmost precision. The pace and mood of the film are wonderful, but it all leads up to one of those maddening nebulous endings that will make you throw things at the screen if it’s within reach. Although that really doesn’t ruin the rest of the film in any way, such an approach at least makes you wonder how a storyteller could decide on that course of action.

Like Someone in Love is the vision of writer/director Abbas Kiarostami (writer/director of Taste of Cherry and Certified Copy). It’s only his second film to be made outside of his native Iran; the other was the Tuscany-based Certified Copy. The title comes from the Ella Fitzgerald song played in the film, but I really don’t think that it describes the movie very well even though it could be considered to fit the plot. The original title was The End, and as you’ll see, that actually works better.
My investigation revealed that there was specific inspiration for the movie. Kiarostami was visiting Japan and saw a woman dressed in bridal clothes on the side of the road. When he later returned to Japan, he looked at women in his travels and realized that he could very well see the bride again and wouldn’t recognize her because she would be in different clothes and never wear that dress again. This is an interesting concept, and I often wonder how many times I pass by people I know or don’t even know but encountered before. That little boy at the airport who watched me play my Game Boy, that old lady on the plane who commented on my writing in my journal or that woman from England with whom I played games of Words with Friends for weeks — where are they now?

Like Someone in Love is such a spare movie that there are really only three main characters and a fourth minor character. With such a focus on these four actors, they had better be good — and they are. The film takes place over two days near Tokyo, Japan. A lengthy scene in a bar at the beginning of the film introduces Akiko (Rin Takanashi), a sociology student who moonlights as an escort, and her handler/pimp (Denden). This scene is indicative of the pace and level of detail of the film as we listen to Akiko on the phone even though we can’t see her and the pimp tries to get her attention to send her on her next assignment. Akiko takes a long cab ride to the home of elderly professor Takashi (81-year-old stage actor Tadashi Okuno in his first leading film role). The film details their time together at Takashi’s home and their trip back to Tokyo where Akiko has to deal with her jealous boyfriend Noriaki (Ryo Kase). A lot happens in the film, but it’s all about the details of everyday existence.

The opening scene and Akiko’s cab ride slow down the film to a suitable pace and force you to linger on the details. While listening to Akiko on the phone, you can’t help but let your eyes wander around the bar and take in the scenery and the characters. Once you’re in that mode of movie watching, the rest of the experience flows easily. Akiko’s pimp knows Takashi and sends her to him because he thinks he’ll enjoy her company. He does, but it’s not at all about sex. Takashi looks at Akiko as a child, and all he wants to do is make her soup and keep her comfortable and happy. It’s certainly a different type of relationship with an escort, and all I could think about is Holden Caulfield enjoying the company of a prostitute without sex in The Catcher in the Rye. Takashi continues that father figure role as he drives Akiko back to school and has a man-to-man talk with her boyfriend after he has a fight with Akiko. The original title probably refers to the end of Akiko and Noriaki’s relationship. I like films that force you to pay attention and also don’t bore you in the process. Like Someone in Love feels lived in with you visiting like one of the family.

Unfortunately, there’s a downside to the proceedings. I don’t mention plot elements beyond basic setup and character motivations; this review won’t be any different. It’s a unique phenomenon in a movie theater when complete strangers turn to each other after the credits roll to ask what just happened, and Like Someone in Love has that kind of ending. It is abrupt and doesn’t really fit the lyrical beauty of what went before. Perhaps that’s the point. Perhaps Kiarostami wanted to play off the original title and give his work an “end” to remember. I can’t say either way. All I can confirm is that I internally screamed “No!” at the ending and heard a lot of other vocal dissatisfaction from the folks in the theater seats. Like Someone in Love had great promise up until that final scene — a sequence that I consider a cheap trick to generate buzz or word of mouth. Kiarostami’s techniques as a filmmaker are enough to lure you in, and the characters keep up your interest.