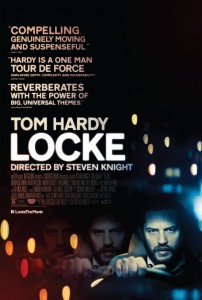 An obsessive construction manager finds his world unraveling the night before his biggest assignment in Locke.

No matter how prepared we try to be, fate — it would seem — often has other plans for us. Ivan Locke (Tom Hardy) is the consummate perfectionist. He’s a high-profile construction manager, overseeing projects that demand his ever-constant vigilance on every detail. The latest challenge involves one of the largest (and most complex) projects in England. His firm is under immense pressure to deliver it without incident, and their new parent company back in Chicago is counting on him to bring it all to fruition. At that critical moment, Locke gets an unexpected call that dares to infuse chaos into his meticulously orchestrated life. For Locke, the news is just another wrinkle that’s sure to bend to his fastidious will, if he can only focus long enough to keep it all from crashing down around him.

The most novel facet of the film is that it all takes place inside Locke’s car as he travels across the country determined to set things right. Every other character exists only as a voice heard over the speakers of his in-car phone connection. Writer/director Steven Knight transforms what initially feels like a dead-end gimmick into a tense, claustrophobic drama that insidiously works it way into our psyche. We can feel Locke’s world closing in around him. We can sense the air of the car growing stale and warm as the stress mounts. The outside world seems miles away with the nighttime setting only heightening the sense of solitary existence. 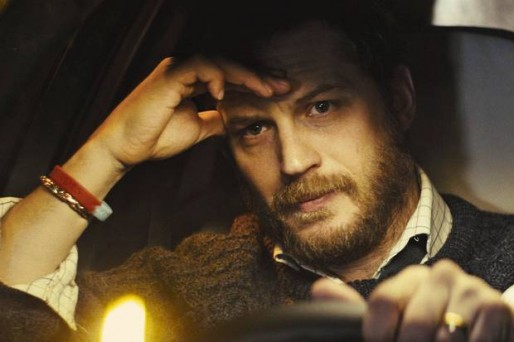 Hardy has to carry the story entirely on his shoulders and bears the weight with memorable ease. His monotone delivery initially gives the impression of a singularly-focused, logic-above-all character impervious to outside distraction. We get a sense that Locke could juggle the world while walking the thinnest tightrope across any divide until, suddenly, we realize he’s just as human as the rest of us. As the cracks slowly emerge and widen, we watch the inevitable release that exposes the man behind the curtain.

I can’t recommend the journey for everyone. It’s a slow-burn ride that will, no doubt, challenge the attention spans of many. Hardy’s monotonous dialogue, coupled with the hypnotic surroundings, are sure to induce their share of contagious yawns. For those willing to sit back and let Hardy drive, this one-man show will get you where you want to go.