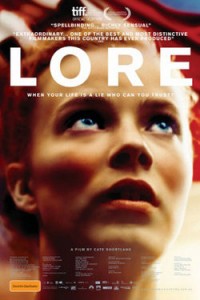 World War II seems to be an endless supply of perspectives and stories that surface in books, movies and various other forms of historical records. The best of these introduce something unexpected and perhaps unsettling to the way you look at a group, location or ideology. Lore uses all of the familiar tropes of fairy tales and war films to tell the unique story of German children on the run from various forces.

Cowriter/director Cate Shortland started the long development cycle of this film when she read the Rachel Seiffert novel The Dark Room. Shortland is of Jewish descent and Australian nationality, and Lore is an Australian/German coproduction. She and cowriter Robin Mukherjee concentrated on the central tale in The Dark Room for this film. In the waning days of World War II with the Allies fanning out across Europe, a group of German siblings leave home and fend for themselves in a long journey to their grandmother’s house. The Germany of 1945 was divided up by the Allies into various zones, and that topography offers challenges to the children.

At the start of the movie, Mutti (Ursina Lardi) and Vati (Hans-Jochen Wagner) — roughly Mom and Dad in German — are in a hurry to gather the children, pack up their belongings and move to another location. They offer no explanation to the children, and before long, Vati leaves the family and Mutti later leaves the children behind, giving oldest child Lore (the fabulous Saskia Rosendahl) — short for Hannelore — the responsibility for her brothers and sister. The siblings include second-oldest Liesel (Nele Trebs), infant Peter (Nick Holaschke) and twins Gunther (Andre Frid) and Jurgen (Mika Seidel). At first, Lore doesn’t know what to do until she wears out the welcome with the neighbors because of the children’s begging for food and Peter’s incessant crying. It becomes clear that the children need to go on the road and make their way to their grandmother.

The road is more dangerous for the children because the locations are unfamiliar and the citizens are very suspicious of strangers. The locations are dark and foreboding as if they were straight out of fairy tales by the Brothers Grimm. The children are not without a protector of sorts in the mysterious Thomas (Kai Malina), a young man with a back story and papers that are questionable. Thomas joins the children because he, too, wants to get out of the area, and they share an uneasy alliance. I’ve left out the true nature of the plot because this twist on war films gives Lore its identity. It’s enough to say that you’ve never experienced a film from the children’s perspective.

Rosendahl really breaks your heart with her performance. Caught between childhood and adulthood, Lore questions everything she knows, and that inner trauma emerges through Rosendahl’s emotions and actions. Malina and Trebs have their moments to shine as well. The film’s dynamic of children caring for themselves without adults feels a lot like Hirokazu Koreeda’s Nobody Knows without the confinement in that movie to an apartment. Lore was Australia’s nominee for best foreign film, but it didn’t make the short list of the final nominees, which shows how strong the final choices are. Lore creates its own place among World War II films, and its heart-wrenching scenes will stick with you for a long time.