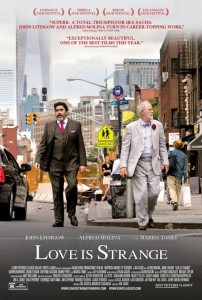 An elderly gay New York couple finally get married only to have it irrevocably change their decades-long relationship in Love Is Strange.

Ben (John Lithgow) and George (Alfred Molina) have lived together as lovers for nearly four decades. Ben is an accomplished painter who suffers from continual depression. George teaches music at a local church and acts as Ben’s calming salvation. With same-sex marriage legal in New York, the two jump at the chance to make their relationship official. The euphoria and beauty of the moment is quickly doused when George returns to work only to find that the church has demanded his immediate dismissal. As the breadwinner of the family, it isn’t too long before the couple is forced to sell their co-op and look to friends and family for a place to stay.

Unfortunately, nearly everyone they know also lives in New York, where extra space is hard to come by. Their only option is to temporarily split up until a more permanent solution can be found. Ben moves in with his nephew Elliot (Darren Burrows), Elliot’s wife Kate (Marisa Tomei) and their son Joey (Charlie Tahan). Meanwhile, George is forced to couch surf with some of the couple’s younger, gregarious friends who always seem to be hosting another loud party. As the days stretch into weeks, resolution is nowhere in sight and their once-impenetrable relationship is stretched to the breaking point. 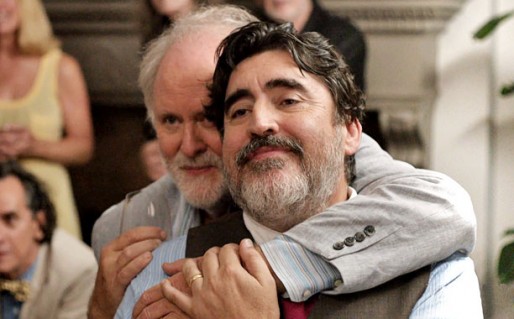 Writer/director Ira Sachs was also the main force behind the incredibly wicked and wonderful 2008 film Married Life. He pens a story here that’s far more subtle and down to earth. The performances from its two main stars are exceptional. Their ease with one another gives the impression of a camera simply recording them in real life. Every interaction between the two is laced with a near-psychic awareness of what each other is thinking and feeling. We never doubt the depth of their connection.

The story itself could borrow from the effortless energy and emotion of its stars. This very dry tale is often flat and obvious, and it leaves far too much unsaid to keep our interest. Who among us couldn’t foresee the Catholic church having a problem with an openly gay employee? Several subplots hint at deeper layers, but none of them are ever revealed to us.

This is also a film with a troubled history. It garnered quite a bit of press when branded with a highly questionable R rating. The only apparent reason for the rating is that it’s a story about two gay men — a fairly tame story at that.

Lithgow and Molina deserve much better. This is a sometimes touching story about the unfairness of life and how tenuous even the most solid relationships can be in the face of unforeseen challenges. Unfortunately for both actors, the biggest of those challenges is a dull script.