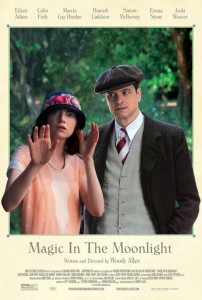 A master magician, determined to expose a medium, meets his match in Magic in the Moonlight.

An obnoxious but successful 1920s magician, whose real name is Stanley (Colin Firth), is approached by his good friend and professional protégé, Howard (Simon McBurney), with an amazing story. Over the years, both men reveled in exposing unscrupulous “psychics” who use magic tricks to defraud unsuspecting people with elaborately staged séances. Howard just met a new American medium, Sophie (Emma Stone), whose secrets he’s been unable to uncover. Much to his own shock, he’s now convinced that Sophie is the real deal. He begs his esteemed colleague to join him for an upcoming séance so that Stanley might find the real source of her so-called powers.

Intrigued but certain of ultimately exposing the ruse, Stanley takes Howard up on the challenge, adopting an assumed name and background so as to not alert Sophie to his real motive. Once there, he finds himself captivated by this hypnotic American. She’s lovely, engaging and, above all, quite believable. She instantly describes intimate, accurate details about his personal life and openly questions contradictions she senses in his story as presented. Stanley, resolute in his position, decides to spend as much time as possible with the mesmerizing spiritualist, only to become enchanted himself. 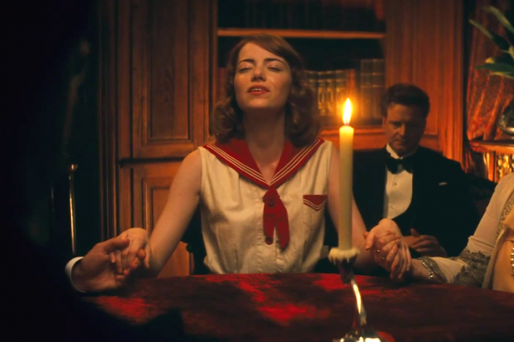 Woody Allen, now effectively expelled from shooting in New York City as a result of his embattled personal life, gives us a romantic European period piece bursting with the beauty of European scenery and the simplicity of an earlier age. Every scene is a visual smorgasbord of bright colors, great outfits and vintage accoutrements of the period. The characters and performances are, in typical Allen fashion, well written, quirky and, for the most part, solidly delivered.

Unfortunately, sleight of hand from a master illusionist can’t distract us from the numerous shortcomings of the plot. The pacing is far too slow for the material, making it feel much longer than its 97-minute running time. Allen gives us some witty dialogue along with some entertaining moments, but he doesn’t do it reliably enough to hold our interest. Firth and Stone are exceptional while apart. Together, there’s no electricity whatsoever between them. We can’t for an instant understand why either of them would find the other even remotely interesting.

One of the film’s biggest letdowns is its finale. After an overly-long setup, we get a rushed, simplistic resolution. Allen’s biggest trick, however, is vanishing any hint of a proper ending.