When it comes to horror films I can be as stingy as ole’ Jack O’ Lantern. For me the best horror films need to go beyond the easy fright. They need to crawl beneath the skin and into the deep emotional psyche. That requires a solid, believable story line to go along with the creepy atmosphere and the hair-raising jolts of pure terror. 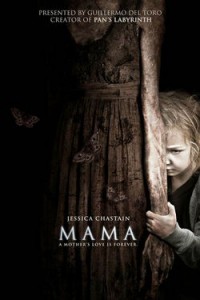 Mama starts off with a major boost in cred by announcing, “Guillermo del Torro Presents…” Few movie-makers today get my immediate attention more than del Torro but, alas, the credits reveal that he’s little more than the Executive Producer lacking any writing or directing credits.

Many of the signature elements are here including well conceived thematic opening credit artwork that sets the proper stage. The initial story is also solidly enveloping and thought provoking.

The main star of the film is Jessica Chastain playing a reluctant, but willing-to-learn foster mom to two young girls whose recent past is one that can only be mainly guessed at, having survived alone in an abandoned shack in the woods for five years. I’d totally forgotten it was Chastain as here we see her with short black hair, dark, nearly Goth makeup and covered in tattoos. Her longterm partner, Lucas, is played by Nicolaj Coster-Waldau (many today know him as Jaime Lannister in Game of Thrones). Lucas is the girls’ uncle, and happens to look exactly like their disappeared father, Jeffrey (also played by Coster-Waldau). The only difference is that one sports a beard while the other doesn’t.

As the plot unfolds the frights initially grow but then they fall off as the story devolves into less believable territory. It so wants to have the magic of Pan’s Labyrinth or The Orphanage but just can’t conjure up the essential elements.

It’s not a bad film but I expected more and didn’t get it. I did enjoy the ride and promised I wouldn’t poke too deeply only to have the story lift the curtain to expose the shortcomings all by itself.

The girls are played wonderfully with the older daughter being most notable (Megan Charpentier). I expect we’ll be seeing more of her soon enough. I also have to note that Coster-Waldau is trying to play an American in this film and the Danish actor just doesn’t pull it off. He looks the part but his accent is something quite unique and distracting at times.

When it has the potion right Mama is a great ride.  Unfortunately it just can’t sustain it long enough to start off my 2013 movie season with the scream I expected.