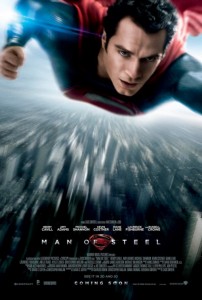 Superman is one of those iconic comic book characters who transcends his origins and adaptations such that he’s one of the most recognized characters in the world up there with Mickey Mouse and Jesus Christ. It’s no surprise that yet another director wanted to take a crack at Superman after the mediocre Superman Returns. Unfortunately, there are so many problems with Man of Steel that it might have been better if they just didn’t make it at all. The film introduces yet another origin story and retreads familiar plot elements, which might set up things for a really great sequel that doesn’t need to cover such territory and can just jump into a new story a la Iron Man 3. Man of Steel will likely disappoint even the hardiest Superman fans with its excess, stolen qualities of other superheroes, annoying product placement and questionable casting.

It’s a daunting task to take on a character like Superman, but I would have thought that director Zack Snyder was up for the task. After three successful films in a row (300, Watchmen and Legend of the Guardians: The Owls of Ga’Hoole), the genesis for Man of Steel’s problems may have begun with the awful Sucker Punch. That film layered ample special effects on a paper-thin story and awful acting. With Man of Steel, the story and acting are better than that, but the special effects overwhelm everything else. Just because you can get a $225 million budget doesn’t mean that you need to use it. I was much more impressed with the flying scenes in the underrated Chronicle, and their budget was somewhere around $12 million. Part of the blame for Man of Steel’s blandness must go to writer David S. Goyer, who has had hits (Jumper and Batman Begins) and misses (the FlashForward TV series and Ghost Rider: Spirit of Vengeance) over the years. There just wasn’t much new in this film, and that’s what the movie needed the most — a fresh direction with an assumption that most of the world knows how Superman became who he is and what powers he has.

The first problem with Man of Steel is how long the film lingers on Klingon, uh, Krypton, Superman’s home planet. With spaceships, flying creatures and towering structures, the Krypton segment feels a lot like Star Wars with a little bit of Avatar and How to Train Your Dragon thrown in for good measure. This is all a prologue to why Superman feels and acts the way he does. Jor-El (Russell Crowe) and Lara Lor-Van (Ayelet Zurer) have a baby they name Kal-El just as Krypton is going through political upheaval and worldwide destruction. General Zod (a spastic and wonderful Michael Shannon) and right-hand woman Faora-Ul (Antje Traue) stage a coup against Kal-El and his generation of leaders but get caught and imprisoned in some black hole-like place. Jor-El and Lara Lor-Van package up little Kal-El into a pod that looks like a Super Sperm and send him off to Earth. You would think that Crowe’s part would be over after the Krypton segment, but he really has a large part as a ghost-like presence on Earth, too.

Man of Steel spends a lot of time in Smallville, Kansas, as well as Krypton. Jonathan Kent (Kevin Costner) and Martha Kent (Diane Lane) find Kal-El’s pod and raise him as Clark Kent. Cooper Timberline and Dylan Sprayberry ably play Clark at different ages as he struggles with his powers and how both to control and use them. It’s cool to see Clark look through objects and people with his X-ray vision or heat up a doorknob to burn someone’s hand, but those are just gimmicks in a film desperate for a plot. An adult Clark (Henry Cavill) travels around from job to job and moves on whenever he has a conflict that requires him to use his powers. This is more like the television series of The Incredible Hulk than a Superman story. At one point, Clark grows a beard and works on a fishing vessel right out of Deadliest Catch. All of this origin stuff and filler material adds fluff to a simple story in which Lois Lane (Amy Adams) tries to track down Clark because of the stories and impressions he left behind and General Zod and company come to Earth to look for Kal-El and threaten to destroy the planet if they don’t turn him over. That’s it. Sure, there are lots of midair fights and tons of destruction, but the movie doesn’t have much to keep you interested.

There are some positives to the film, so it’s not a total washout. Superman’s suit sans red trunks is a nice redesign, and the costumes throughout the film are impressive. Hans Zimmer’s score is good and appropriately dramatic, but I miss the familiar Superman theme from the other movies. I liked many of the cast members. Cavill makes a fine Superman who blends the best of the comic book versions and the charisma of the unforgettable Christopher Reeve. I liked both sets of parents for Kal-El/Clark, and Crowe almost overshadows Cavill with Jor-El’s monologues and advice when Clark really needs it. I wish there were more of Shannon in the film; the downside of that would mean that there would be more of the General Zod storyline. Shannon just gets better and better, including his most recent role in The Iceman. As much as I like Adams, she just doesn’t fit the mold for Lois Lane — even a “modern” one. Similarly, Laurence Fishburne as Lane’s editor Perry White is just stunt casting that’s distracting.

There are perhaps three major negatives for me beyond the plot. First, Snyder delivers a Superman that steals movie tropes from many other superheroes. When first learning to fly, it looks a lot like Peter Parker’s awkward jumps in Spider-Man. When Clark bares his chest, this recalls Hugh Jackman as Wolverine. The fight down the main street of Smallville looks a lot like a similar sequence in Thor. When Superman unleashes his heat vision, it reminds me of Cyclops taking off his visor. Characters destroying buildings in Metropolis have the spirit of Hulk when he smashes things. The second negative is the constant barrage of special effects from the first minute to the last. Smallville and Metropolis undergo so much destruction that I sat there in as much awe as the characters staring up at the tumbling skyline. Man of Steel may lose on many things, but it won’t be for special effects. Third, the product placement is obnoxious. It’s expected at this point that movies may have toy tie-ins as well as soda or amusement park promotions. It just gets ridiculous in Man of Steel with battles going through the middle of a Sears, an IHOP and a 7-Eleven in Smallville. Was that a U-Haul van that went flying by? You bet! Ugh.

Despite all of my complaints, Superman is one of my favorite superheroes. I hold out hope that a sequel will ditch all of the crap and get right to a great story. I’m amazed that, in a film about Superman, there are only exactly 2 ½ references to Clark as “Superman.” (The ½ comes from when Adams almost dubs Clark that name before getting interrupted by feedback.) At least Russell Crowe didn’t sing here, but Allison Crowe — no relation — delivers an awful version of “Ring of Fire.” Oh, don’t bother with the almost absent 3D for this film — I watched most of the film with the glasses on my head and saw very little blurriness — but I bet the special effects will look awesome in IMAX, either regular or 3D. Man of Steel was one of the most anticipated films of the summer season. I hope that the disappointment from the fans doesn’t kill the series and cause yet another reboot. Brandon Routh doesn’t need Cavill to join him so soon in the club of ex-Supermans.