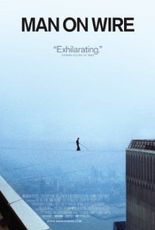 I nearly forgot to mention one of the better movies I’ve seen this year. It’s been a busy week so I didn’t have time to write that my son and I saw Man on Wire last week. This is a documentary that you really need to want to see to find it. It was only playing on one screen at a badly aging theater in Philadelphia. Why that’s its only venue I don’t know but it deserves a much better fate.

The movie covers the extraordinary true-life events of wire walker Philippe Petit culminating in his stunning walk between the two World Trade Center towers in 1974.

The documentary is presented in a very compelling fashion that grabs your attention almost at once. You can’t help but to pull for the quirky Petit. He and those involved tell the story in a manner that keeps everyone in the theater glued to the details.

I can say that its 100% rating on Rotten Tomatoes is fully earned and that’s with over 100 reviewers rating it. You’ll be taken by the story, captivated by those telling it and laugh at the jokes along the way. You’ll also learn quite a bit about the details of wire walking with respect to the surprising depth of mechanical, physical and mental preparation needed for such endeavors.

The one distracting element of the movie is, not surprisingly, the other main stars of the movie—the World Trade Center towers. I suspect this movie was conceived some time ago and held off long enough to allow people to come to terms with their absence. Even now most references to it in the movie beg you to recognize that they are now as much a part of history as the event of the movie itself.