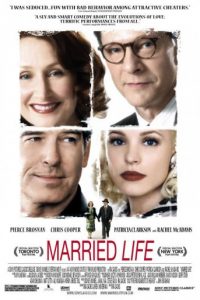 A quirky 1940s businessman comes up with a novel approach to solve he and his wife’s problems in Married Life.

Poor Harry Allen (Chris Cooper) lives each day having to endure his beautiful, adoring wife Pat (Patricia Clarkson) all the while knowing he no longer finds their relationship exciting. Then one day he meets an attractive young war widow named Kate (Rachel McAdams) who’s vivaciousness reinvigorates the sullen Harry. He’s so smitten that he tells his best friend Richard (Pierce Brosnan) about the affair and even asks him to look in on her while he’s away. Harry’s afraid she might look outside the confines of an older man for something more adventurous. He knows he can trust his lifelong friend to do the right thing and just keep an eye on her.

While Richard looks after Kay, Harry has to figure out how to approach his doting wife. He knows that her entire life revolves around Harry and their relationship. She’ll be permanently broken if he divorces her. If only there were some other option that would get him out of his marriage and allow him to marry young, innocent Kay. Of course things are not always as they seem, especially when everything seems to be going so perfectly. 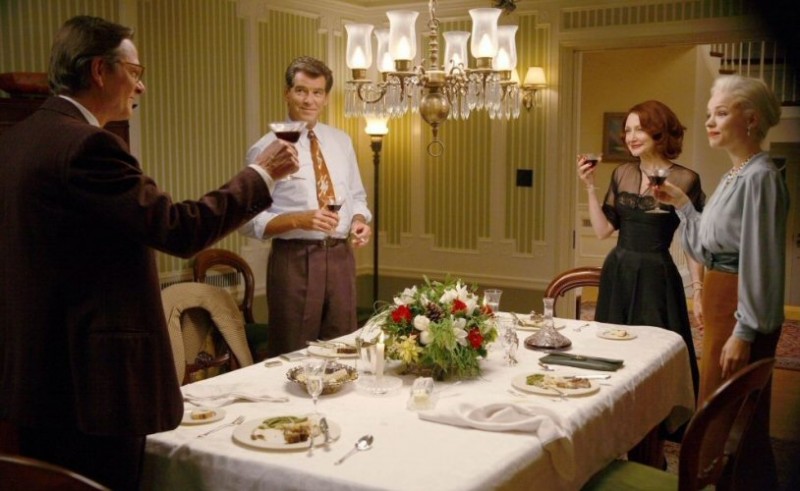 Listed as a dark comedy it’s a film with much emphasis on dark and little emphasis on comedy. The setting is not long after World War II. The story is one that continually gives the impression of going in a clear direction and then fools everyone by taking a totally different path. The twists and turns keep it all very interesting.

The acting is first-rate. In fact, I think this is yet another great example of how solid an actor Brosnan is. The guy could have just been Bond and retired. Instead we get another great performance. The story is told through narration from his character’s point of view and it’s his demeanor and presence that makes this not only work, but to drive the story forward. The only misstep is McAdams. She just doesn’t fit the story at this point in her career. She didn’t do a bad job. It’s just that she looks too innocent. It’s a role that needs someone with a “dirty girl” kind of look or reputation and McAdams (at least so far) has mainly played the good girl.

The cinematography is notably excellent. Several shots bathe the viewer in 1940s aura. All the sets look great as do the clothes and the personalities. It’s like a Leave It To Beaver episode re-imagined by Daniel Steele.

Some may find it a tad slow, but for fans of intrigue the pacing couldn’t be better. If you’re into a solid story with tension-filled plots and fantastic acting then this might just fit the bill. It certainly did for me.