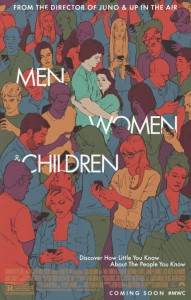 High school students and their parents struggle with the changes that result from new technologies and the Internet in Men, Women & Children.

Every generation faces a new set of challenges. Today, one of those challenges is in how the Internet and all that’s come as a result of it have forever changed the lives of everyone who experiences it. The ability to have information always at your fingertips sounds like an incredible benefit, but at what cost? Suddenly, predators have a means to stalk children in previously inconceivable ways. Relationships are tested by device distraction, and Web sites can turn the thought of cheating into reality with the simple act of some covert typing. Video games can turn kids into desensitized zombies, while others turn to or suffer from cyberbullying.

Don and Helen Truby (Adam Sandler and Rosemarie DeWitt) find that the spark has gone out of their marriage, and each looks to the Internet for personal answers. Patricia Beltmeyer (Jennifer Garner) obsesses endlessly over her daughter Brandy’s (Kaitlyn Dever) cell phone and computer use. Donna Clint (Judy Greer) lives vicariously through her popular daughter Hannah (Olivia Crocicchia) with little real concern for the consequences. Hannah’s best friend Allison (Elena Kampouris) struggles to maintain what she believes is the perfect figure in hopes of landing her dream boyfriend. Meanwhile, Kent Mooney (Dean Norris) worries about his son Tim’s (Ansel Elgort) recent withdrawal and descent into video gaming.

This heavy ensemble piece from director Jason Reitman initially reminded me of Steven Soderbergh‘s dark 2000 ensemble work Traffic. As it unfolded, I thought it better resembled 2013’s Disconnect, especially with regard to its more somber tones. Make no mistake about it. This is a story with a message, and that message seems to be that the Internet is an evil, evil thing, at least judging by the evidence it presents. Nearly everyone in the film is dysfunctional in one way or another. Patricia is so painfully overbearing that I felt compelled to call some sort of virtual child services department. It’s impossible to watch this film and not feel an immediate disdain for virtually everyone in it and everything it represents. Balance is an essential part of any story, and this one has none to offer.

It’s a real shame because much of the effort is noteworthy. Not only is the acting solid, but it’s also the first film that presents texting and tweeting without making it ludicrous or turning it into a commercial for a social network. It’s also wonderfully narrated by Emma Thompson, whose hypnotic, reassuring voice could sell me on almost anything — other than this film. It also boasts a number of powerful quotes from the works of Carl Sagan.

The final blow is that it never seems to fault any of the characters for their horrible, shortsighted actions. No, it’s all really the fault of the malevolent Internet. Maybe that’s Reitman’s excuse as well, but then what was his justification for Labor Day?