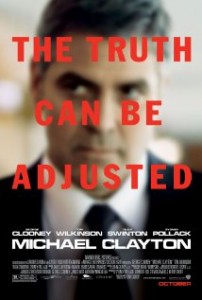 This is yet another movie that got rave reviews (Roger Ebert used the word “perfect” in his description of it) that were so positive that I feared there was little chance I would like it. I find this happening all the time with movies that have “universal” appeal. This meant I went into the movie with lower expectations than I might have otherwise had based solely on the reviews. That means I had a better chance of being impressed here.

We watched and watched and watched, seemingly for an eternity. In the end my thinking was that at two hours, this movie felt twice as long as The Firm and that film was 30 minutes longer. What’s more is that the two stories share some similarities and I think the latter was a much more enjoyable experience. Then again, I just can’t get enough of Wilford Brimley.

This isn’t to say Michael Clayton is a bad movie. It has its moments. The acting is fantastic. Most noteworthy is the performance from Tom Wilkinson. However, many of the characters in the movie feel no more important than most of the props. There’s a brother who has issues but why, we don’t really know. There’s an estranged wife/ex-wife but we don’t know which or why though we can guess. There’s the head boss of the big corporate entity who has a past that’s hinted at but never explained. There’s the lead council for the same company who has motivations that are never fully put forth. I could go on for another several characters.

There are also countless pieces of the story that make little sense and I don’t mean later after you’ve had a chance to think about it. They don’t make any sense the moment you see them. I have so many questions I’d like to ask right here but can’t in case anyone reads this and hasn’t seen the movie. I think I can say this much: So much care is taken in one scene to avoid notice while in a scene a few minutes later the same characters act with complete reckless abandon. Why the horses? What was the importance of the dash issue? All of these things conspire to drag out the story and confuse the entire plot. It only pains you later to realize they’re also never going to be resolved. Their existence in this movie is a complete mystery.

The end of the movie features a wonderful pay-off but it just doesn’t make up for the previous one-and-three-quarters hours. This is a story that could have been told, with equal impact, in well under 90 minutes with some creative editing and little else.

If you’re into movies for the performances and the look, go rush to see this. If you’re looking for depth, feeling and edge-of-your-seat drama/suspense, pick something else. I nearly fell asleep twice.