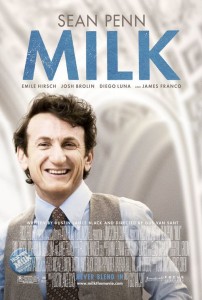 Last week we headed out to see the latest Sean Penn film—a biopic entitled Milk. It’s the story of the first openly gay politician elected to public office in America.

The story takes place mainly throughout the 1970s and appears to stay very true to the actual events of the man and his time. The film looks very much like the mid-70s with a grainy, dull look from start to finish.

If you don’t know the story of Harvey Milk then let me start off just as the movie does (and I’m not sure how I feel about this) that he was killed in 1978. Again, the movie’s first few moments point this out so I’m not really exposing any surprises here. I’m mixed on whether I’d have preferred to find that out at the end of the movie or the beginning. At the beginning it allows me to focus on that element and look for enemies and how it might go down. By waiting until the end they’d have maximized the emotional pull.

The acting in the movie is first-rate. Sean Penn does such a good job in the role that you forget it’s Penn and just go for the ride. His friends (the main one played by James Franco) are all played perfectly. Additionally the job done by Josh Brolin as Milk’s co-worker is notable. I expect Penn to be nominated and wouldn’t be at all surprised to find others nominated here as well.

As for the movie itself the story is fairly straight-forward and a bit predictable—especially given that you know the final outcome from the start. There were some moments I felt went on a bit too long and the movie is presented in a methodical fashion. The upside of that is that you’ll really feel like you know Milk when it’s all over and the emotion is still there by the end. Make no mistake, Harvey Milk was a force. He knew how to build support and maintain it and carried gay rights forward as a result. The movie does a great job of giving you an inside look at how it all was put together.

All in all it’s a solid movie with some great acting but I wouldn’t nominate it for Best Picture.