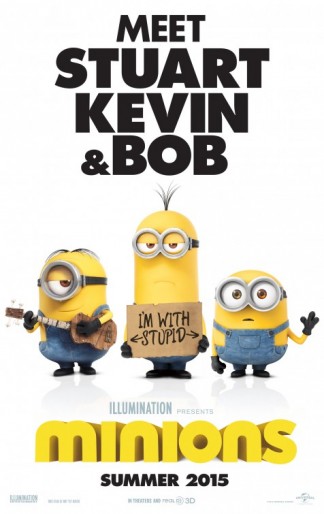 If you ask anyone about the Despicable Me movies, they’re sure to mention the Minions, the tiny yellow creatures that steal the show. It was only a matter of time before the Minions had their own film. I really looked forward to this feature because the Minions appeal to those of us who like slapstick humor and The Three Stooges. Unfortunately, the filmmakers didn’t quite hit upon what makes the Minions so much fun to begin with. In short bursts, they’re hilarious. When tasked with carrying an entire movie, it’s another thing entirely. Minions offers glimpses of what could have been the best summer family film of 2015 as it gets bogged down in an unfunny middle part where one of the leads slipping on a banana peel would have been a welcome stunt.

You would think that the Minions would be in good hands with the filmmaking team involved. Codirector Kyle Balda codirected a few shorts involving the characters, codirector Pierre Coffin also codirected the Despicable Me films and writer Brian Lynch cowrote Hop and wrote the script for the ride at Universal Orlando in which guests get turned into Minions. The groundwork is all there, and the talent is on board. The only true holdover from the previous movies is the nonsense Minionese language that the characters speak, which Coffin has voiced for all projects involving the little yellow mischief-makers. Things just don’t seem to gel, and the Minions usually bring me great joy with their silliness. That’s what I expected, and instead of yellow, the movie left me rather blue about the experience that could have been.

Minions is a breakout film for the three main Minions — tall and thin Kevin, one-eyed troublemaker Stuart and young child Bob. A short intro explains how the Minions exist to serve an evil master. However, over the millennia, their clumsy nature has also killed off most of their masters. All 899 Minions retreat to a cave in Antarctica where they can’t hurt anyone and can’t fail anymore. Kevin wants to go on a road trip to find a new master, and only Stuart and Bob end up as his companions. Their journey takes them to New York City. It’s 1968, a time rife for visual puns and outrageous fashion. The trio learn about an event called Villain-Con in Orlando, and they head there to convince Scarlett Overkill (voiced by Sandra Bullock) to be their new leader. Things take a detour to London because Scarlett has a crazy desire to become queen, and the plot’s all rather manic after that. Kevin, Stuart and Bob have personalities right in line with The Three Stooges. They’re just not enough to carry this prequel on their own.

I admit that I love the little creatures despite this movie. There’s just something humorous to me about characters spouting silly dialogue or sounds in the hands of a great voice-over actor. Coffin is amazing in that role, and what he has done with the Minions’ speech puts him in line with Howie Mandel as Gizmo in Gremlins and Kevin Clash as Elmo in Sesame Street or Baby Sinclair in Dinosaurs. People feel a need to imitate Minionese after watching the characters, and that joy is what I connect to the Minions. Surprisingly, Minionese is what is heard for about half of the movie — I wasn’t truly counting — to the point where this is almost like a foreign film. The human voice actors really don’t stand out against Coffin’s vocalizations. Jon Hamm has the biggest role as Herb Overkill, an inventor whose only purpose seems to be to deliver unusual devices to the trio of Minions. Michael Keaton, Allison Janney and Steve Coogan are also in the cast, but their roles are so limited that their involvement almost seems like intentional padding of the cast. 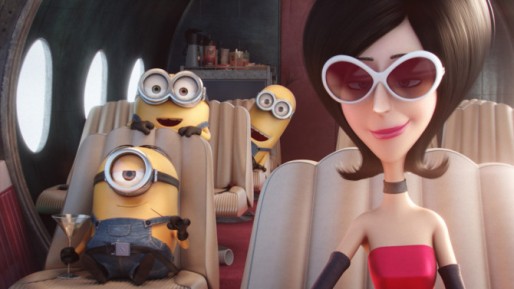 The animation is lush and colorful, which at least makes the film enjoyable visually. I guess it’s a challenge to balance all of that yellow on the screen with other colors and settings, and the animators did a great job in that regard. Things get a bit crazy in London, especially with Herb’s inventions, and that part of the movie is the most fun because the scenes play like something out of a Looney Tunes cartoon. If only that same energy had been spread out evenly over the entire running length, Minions could have maintained my interest and not lost me on the journey. As far as I can tell, there are no new Minions video games tied to the movie. That’s a missed opportunity. The plot, variety of Minions and Herb’s inventions lend themselves to all kinds of video game levels and game play.

Just as Stuart likes playing guitar, the filmmakers clearly like music of the ‘60s because it infuses the film. From The Beatles to The Who, expect to hear music of that time period and a few anachronistic numbers as well. I’m not quite sure why there’s a fascination of certain Minions for bananas. Expect some jokes about them. I haven’t totally given up on these characters despite my lukewarm response to this movie. A third entry in the Despicable Me series is on the way, and that may be just what the Minions need to be interesting again — short scenes or vignettes within a larger entity. After all, as we learned from Minions, these creatures are lost on their own and need a master to be successful.