A single-minded Washington lobbyist exploits every advantage to succeed in Miss Sloane. 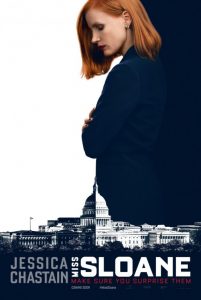 Washington politicos have a word for those who place a high priority on ethics — losers. No one knows that better than Elizabeth Sloane (Jessica Chastain). She’s the embodiment of the belief that the ends justify the means. That attribute makes her the top draft choice when a major new client comes calling. This time around, the client is the gun lobby. They’d like Sloane to head up an effort to defeat new gun control legislation working its way through the Senate.

The problem is that Sloane doesn’t support the gun lobby. She categorically refuses to take part, much to the surprise of her now incensed boss (Sam Waterston). When he insists on her compliance, she leaves the firm, along with several key associates, and joins the opposing effort. This sets in motion an epic battle that threatens to destroy everyone in its wake, including Sloane. Will she be the last one left standing?

I’m a big fan of director John Madden‘s best work, including The Best Exotic Marigold Hotel, Shakespeare in Love and Mrs. Brown. This isn’t one of them. In his defense, Madden’s hampered by a horrid script from first-time writer Jonathan Perera.

What’s so bad? For starters, the entire premise is flawed. Sloane is a woman who would accuse her own parents of incest if it would get her client a victory. In the swamps of Washington, she’s the gator confidently flossing her teeth after every kill. She’s a soulless, heartless machine — but supposedly doesn’t like guns. Nowhere in her life, as presented, does she show any hint of morality except for this one single issue. Perhaps she was assaulted at gunpoint? Nope. Lost someone to gun violence? Nope. The only reason given pretty much boils down to, “It’s what all the smart people believe.”

Regardless of your own opinion (and mine), it’s a morality play that fits this story like a hot dog vendor working a vegan convention. The characters deliver simplistic arguments that everyone accepts far too easily. There’s also a critical scene with an emotional Sloane alone in an office that betrays the entire final act. It exists solely to string the audience along a bit further in an otherwise obvious plot. Madden’s cross to bear is his decision to present this like a missing episode of The West Wing complete with rapid-fire dialogue and rolling camera shots. The big difference is that Perera is no Aaron Sorkin.

It does have its moments. The main performers hit all the right notes, starting with Chastain, who gives it her all as usual. She’s joined by solid efforts from the underused Gugu Mbatha-Raw, the poorly used Jake Lacy and the always reliable Waterston. The film has the right tension, look and cast. What it lacks is an an honest, unbiased approach to its subject matter. It’s the perfect example of a film lost in its own message. 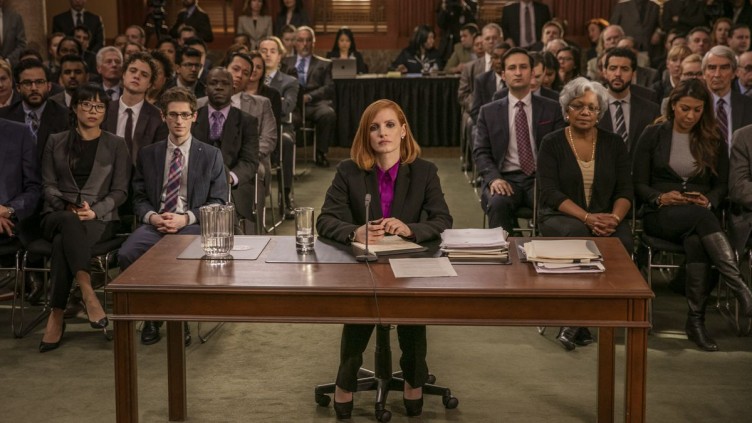