An energetic TV personality is taken hostage after one of his stock recommendations doesn’t pan out in Money Monster.

Lee Gates (George Clooney) hosts a popular stock market analysis show on a major cable financial network. Every stock tip is presented by Gates with glitzy graphics and over-the-top theatrics more commonly found in cheesy music videos. The show’s complex choreography is managed by its veteran producer, Patty Fenn (Julia Roberts). She has her hands full just keeping the temperamental Gates grounded and on topic. Their latest episode is like all the rest until a wayward stranger wanders onto the set. Before anyone can react, Kyle (Jack O’Connell) pulls out a gun and takes over the show. It seems that Gates’s most recent “can’t miss” stock tip wasn’t quite up to its billing, costing the disgruntled hostage taker his entire life savings. The gunman’s half-baked plan is to convince the world that the entire stock market is rigged to line the pockets of the rich at the expense of everyone else. Gates and his producer now have to find a way to mollify Kyle and keep the entire fiasco from becoming a bloodbath. None of them are quite prepared for where this unscripted sideshow is about to take them.

In her latest attempt to break through behind the camera, Jodie Foster directs this curiously engaging, but heavily flawed, thriller. There’s no mistaking its many similarities to the real-life Mad Money show or its animated host. Clooney clearly had Jim Cramer in mind as the inspiration for his role. It’s not what I would call a compliment. The story’s setup is kept to a bare minimum. We’re knee-deep in the action well before the 10-minute mark. Sadly, the first casualty of the affair is the plot. From the moment we first see Kyle roaming around freely backstage, almost everything that follows is pure folly. The logic holes pile up faster than traffic on an L.A. freeway during rush hour. We also can’t ignore a nagging lack of authenticity with the main characters. It doesn’t help that the film’s biggest stars are wrong for their roles. Clooney’s tired clown routine makes him look out of place in nearly every shot. Roberts’s role could have been filled by a complete unknown with no negative impact. The only reason for her inclusion is name recognition and nothing more. The one memorable performance comes from a fresh new face, Caitriona Balfe. Her portrayal of a shrewd corporate communications exec is absolutely mesmerizing. O’Connell and Dominic West (playing the tanked stock company’s CEO) are both wasted.

For all its many faults, the film still manages to keep everyone reaching for more popcorn. It’s brainless, obvious, poorly conceived and yet somehow still mildly entertaining, much like the show it’s depicting. 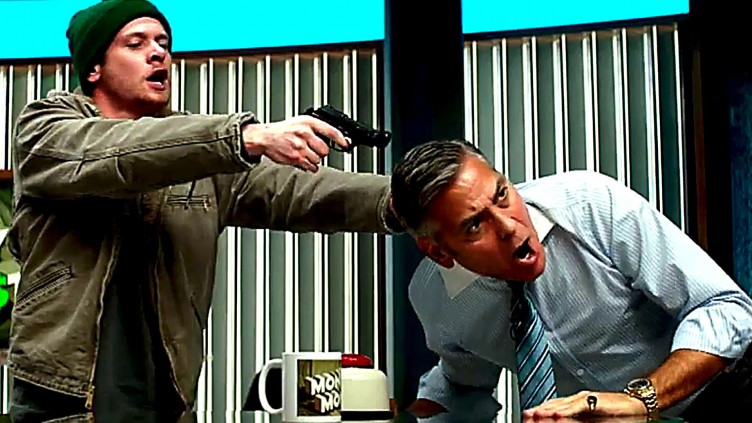