Back in 1985, long before fantasy baseball had become popular, I got involved in one of its ancestral forms and that experience exposed me to the importance of seeing baseball as a statistical entity requiring a different type of analysis. It also exposed me to the wonders of Bill James and his approach called Sabermetrics. Few, if any, in the early days of fantasy baseball were unaware of James and the impact he had on the game. In fact many sports writers view James with utter contempt for how his contribution shifted the mindset of the fan forever.

Then came Billy Beane, General Manager of the Oakland Athletics who applied James’ theories and approach an a grand scale to a major sports franchise. Moneyball is the story of what transpired from there. 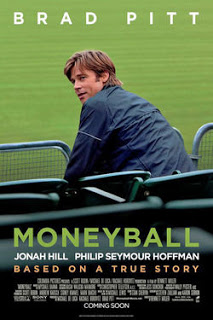 The film starts Brad Pitt playing Beane and Jonah Hill playing his assistant, Peter Brand. Both drive the movie  from start to finish and both are wonderful in their specific roles. We also get Philip Seymour Hoffman playing A’s manager Art Howe. In fact, at first I didn’t even realize it was him given the crew cut haircut.

The movie hits the right tone in most places and even has some nice laughs along the way. However, it fails for me in a number of ways. First and foremost is the pacing. This is a 126 minute film that feels like an entire afternoon—and not in a good way. I wonder if there was any interest what-so-ever in editing this film. There’s far too much back story here. We get long, tedious scenes involving Beane’s daughter, his ex-wife and a totally unnecessary and awkward scene involving the man his ex-wife is involved with. None of this matters to the main thrust of the story and it just makes the whole affair that much longer.

The best parts of the film involve the contentious meetings between Beane and his existing staff of scouts and assistants that, of course, have been approaching the game the same way forever and are loathe to accept the radical changes from this young upstart. The stress lives here and the emotions flow freely. We want more of it but instead we only get glimpses and perhaps that’s due to a plot element that I’ll touch on later about reality.

The main feeling here is that the film really misses the bigger story about the resistance to this evolutionary shift in the sport (and all sports) of true statistical analysis over the old “feel” methods of scouting. As computers continued to evolve and change every other facet of our world so too did they change baseball. That impact is, oddly, minimized in a film that clearly seems to be about that story. A film that focuses firmly on the incredible weight of such a monumental shift would have felt like an Enron-esque story with lots of heat and a heart-thumping score along with lots of visual effects (numbers flying about). Sadly what we get is a slow, plodding bio that hints at the rip tides below the surface.

In typical Hollywood fashion there are several noteworthy diversions from reality in the script. For one thing the movie portrays Beane as having been the one to first try sabermetrics at this level. Actually, his predecessor at the A’s had been applying that approach for some time. Beane simply continued and expanded the practice.

Also the character Peter Brand is fictional. He’s loosely based on Paul DePodesta but DePodesta objected to his name or likeness being used for the film (I’d love to see that interview) so the writers decided instead to create a new character with some similar elements to DePodesta but also incorporating elements of all of Beane’s assistants at the time.

In the end we get a film that’s enjoyable and is doing well enough at the box office to be remembered fondly but  that just isn’t what it could have been—at least for me. Maybe the story I wanted to see wouldn’t have the appeal that this one has but I also think my version would have been a much better film overall.