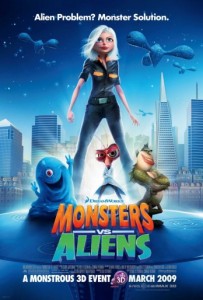 Saw two films this week and nearly forgot to mention one I’d seen a couple of weeks ago. Yes, it’s been that busy around here. At this pace it’s going to be a challenge to see a lot of films at the theater.

Anyway, a couple of weeks back I saw the Dreamworks animated movie Monsters vs Aliens. The theater had it in 3D so, of course, I had to go for it. The early word on this film was that it was Dreamworks first effort that could truly hold its own against most of the Pixar efforts.

MvA is somewhat of an amalgam of “classic” B-movies. There are hints of Attack of the 50 ft. Woman, The Blob, The Day The Earth Stood Still, The Fly and more. At first I was a bit concerned that this would end up being as stunted as Shrek‘s endless needling of popular Disney characters. Thankfully the references are paper-thin and unimportant to the plot.

The characters are an odd mix with some working more than others. The stand-outs are B.O.B. (a brainless, jello-like creature whose name stands for Benzoate Ostylezene Bicarbonate) and Dr. Cockroach (a brilliant scientist who went a bit too far in an attempt to gain the positive attributes of a cockroach). The main character is Susan who, once transformed, is referred to as Ginormica. Her accident causes her to grow to the specific height of 49′ 11 1/2″. Get it? Her character is intended to drive the plot but it doesn’t quite work.

Lastly there are the two characters that totally don’t work. You have The Missing Link, a 20,000 year-old ape-fish creature and Insectaurus, a grub turned huge by nuclear radiation. The bottom line is that they just distract from the movie and feel forced.

The look of the film is solid but nothing special with the 3D effect failing to save the day. Both elements have been done much better in other films. The story is also a bit overdone and drags in a few spots. The voice talent is also noteworthy in that you really have a hard time connecting any stars to the characters.

All in all it was an okay experience that fell short of my expectations. There certainly was nothing here to make Pixar shake in its boots.