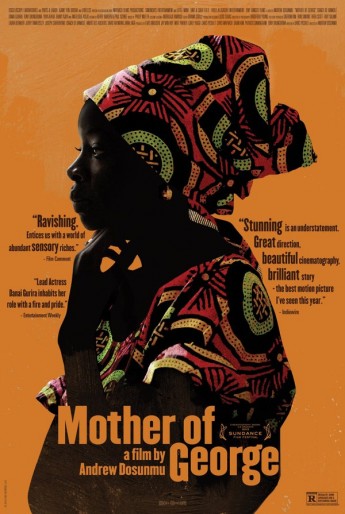 Part of the attraction of foreign films is that they introduce new locations and subjects to audiences that take them away from familiar territory. In some cases, you don’t have to leave American shores to have similar experiences. There are many examples of American films that take place in subcultures and feel foreign. Some of these groups include Orthodox Jews in New York City, Amish families in rural Pennsylvania and Mormon polygamists in Utah. Mother of George takes a common issue for young couples and places it in a vibrant Nigerian community in New York City. Although there are elements that make this movie compelling, Mother of George ultimately mixes flaws and bad directing decisions with strong acting and melodrama for a film as varied as the multicolored dresses of its lead character.

Director Andrew Dosunmu (director of Restless City) and writer Darci Picoult are the creative team for Mother of George. The film opens with a celebration — an elaborate Yoruba wedding ceremony. From there, things get less joyful and more universal in emotions and problems. The wedding joins the ambitions and families of Ayodele Balogun (Isaach De Bankolé) and wife Adenike Balogun (Danai Gurira of The Walking Dead). Ayodele manages and cooks at a restaurant that specializes in Nigerian dishes, and he and Adenike are clearly in love. They can’t even get through the ceremony before Ayodele’s mother, Ma Ayo Balogun (Bukky Ajayi), starts to put pressure on the couple to produce a baby. (As a side note, world musician Angélique Kidjo makes an appearance as Ma Nike.) It’s significant that Adenike’s friend Sade Bakare (Yaya Alafia) and Ayodele’s brother Biyi Balogun (Tony Okungbowa) are in the wedding party because they later start a secret relationship without telling anyone, including the couple.

The dramatic tension comes from that nasty mother-in-law pressuring Adenike to give her a grandson. Ma Ayo Balogun has gone so far as to name this future grandchild George. When 18 months have gone by and Adenike is still not pregnant, the mother-in-law puts the blame on her. In reality, Ayodele could have his own infertility issues, but the mother-in-law will hear nothing of it. Her suggestion to Adenike puts relationships in question and throws the whole family into a manic state. The desire for a male offspring is an issue throughout all of recorded history, so the unique aspect of this age-old dilemma comes from how the characters handle it. Mother of George’s strength really comes down to the acting. The leads are all good. I was actually surprised that De Bankolé blends into the background more often than not. My favorite role of his is as a hit man in The Limits of Control, so I guess it might be a while before he surpasses that role. Gurira is familiar now to people as the katana-wielding survivalist in The Walking Dead. It’s especially nice to see her in a part like this because she displays her range and acting chops here. There are many scenes that center on the agonizing pain in her face and the challenges of her life, and Gurira convinced me that she inhabited Adenike completely.

I wish that there were more cultural aspects to the film than the opening wedding sequence and the elaborate, colorful costumes that Gurira wears throughout. Still, the presence of the Nigerian community infuses the movie. The wedding is a joy to watch because of the many changes in clothes. Many of the guests wear outfits with oranges, yellows and browns. The parents of the couple wear blues. Although Adenike is initially covered up, the couple later changes into purple outfits. Also, everyone seems to have some kind of headpiece or hat. The most memorable part of the ceremony is that everyone rubs money on Adenike before putting it into a bag. This act must signify a wish for the couple’s prosperity; it’s not that different from other cultures’ brides walking around wedding receptions with bags to collect envelopes that contain cash from wedding guests. It would have been nice if one of the couple’s American friends was at the wedding and had the ceremony explained to him or something like that. Nevertheless, I enjoyed these scenes and wished that there were more like them. 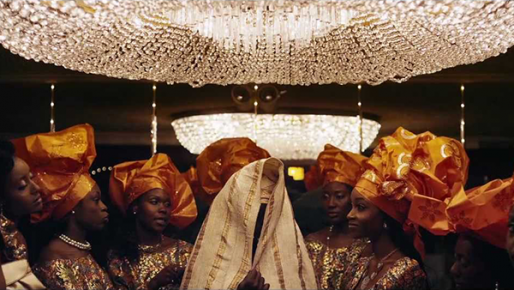 Any problems with the film are a result of the director’s choices rather than the story or acting. Dosunmu has a background in music videos, and that comes through in the style and composition of his shots and transitions. There are some scenes in which characters are entirely out of focus and then come into focus in the last few seconds. In other cases, the cuts and fades are set up like videos or at least short films instead of a dramatic feature. I found to be even more maddening occasions when characters are at the extent of the shot or beyond and almost lean into frame to deliver their lines. If you try too hard to be creative, you ultimately do a disservice to your own work. If you watch the films of Wes Anderson or Jean-Pierre Jeunet (Amélie) carefully, you notice that every single shot is composed like a painting and can almost live on its own. It’s never obnoxious and still creative. Dosunmu has some great ideas for presenting his work; he just fails sometimes in the implementation.

Mother of George captured my interest from the start and held my attention despite the familiar story of the importance of a male heir. Gurira carries the film and will certainly get offered roles other than action movies after this performance. Even when the plot veers into familiar territory, the interpersonal relationships and tense, dramatic ending make Mother of George a welcome departure from other messy family dramas.