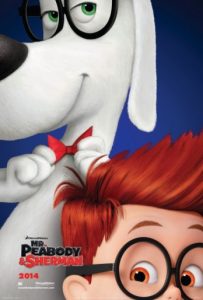 An erudite beagle and his adopted son meet history’s most famous figures as they travel through time in the animation redux Mr. Peabody & Sherman.

In this new, slightly reimagined update of a classic cartoon spin-off, Mr. Peabody (voiced by Ty Burrell) grows up as an outcast. He’s not at all interested in conventional canine cavorting. Knowledge, invention and scholarly achievement are far more interesting to this progressive pup. Once grown and established as a world-renowned academic, he adopts an orphaned human boy named Sherman (Max Charles). Mr. Peabody wants nothing more than to spare him the same indignity he endured of growing up alone. He exposes young Sherman to the wonders of his academically advanced world, including his most intriguing invention, the WABAC time machine. Together, they use it to travel to key dates in history to help preserve their rightful outcome.

One day at school, Sherman finds himself the target of ridicule by one of the popular kids, Penny (voiced by Burrell’s Modern Family costar Ariel Winter). In a moment of weakness, he lets slip that he’s got a time machine at home. Of course, Penny is quite dubious and dares Sherman into proving his claim by taking her to see it. What could possibly go wrong?

I grew up watching the original Peabody’s Improbable History cartoons segments. Frankly, I was a bit surprised to hear that this was the focus of a feature-length film. The original tales, while imaginative, didn’t seem like fodder for a full-length treatment. The film starts by wisely updating some of the less politically correct elements of the original while retaining much of its allure and feel. Burrell does a good impression, while Charles is nearly a dead ringer for Sherman. It also pays tribute to the original by re-creating some of its most iconic moments. 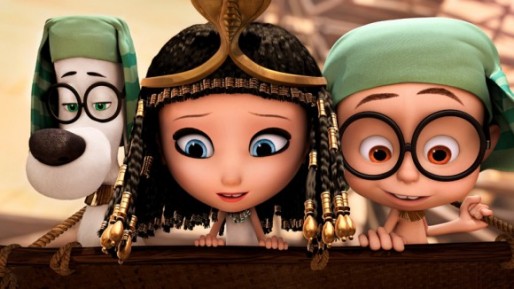 As the story begins to unfold, so too do a number of glaring weaknesses. The biggest is a major disconnect between Mr. Peabody and its intended audience. Very few viewers under the age of 10 will be able to make any sense of the highbrow commentary that makes up the majority of his dialogue. So much of it is comprised of adult-oriented, double-entendre-laden puns that I began to think of the star as “Mr. Punbuddy.” Some of the commentary is funny, but it’s not for the kids. This character would be as interesting to them as any snooty college professor would be. Their connection to the film comes through Sherman and Penny, but both are played far too straight to make them all that interesting. In the end, no one will have much of an emotional connection to any of the characters.

What we’re left with is a dull, unoriginal and highly illogical story that only rarely manages to provide a funny moment, and too many of those fly by in the first few minutes. Even the music by Danny Elfman is a letdown. The only memorable song is a well-known classic-rock tune.

I’d have loved to use the WABAC machine myself to keep the producers from ever going forward with this dog-tired remake.