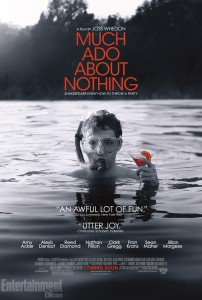 William Shakespeare‘s classic comedic play is reimagined by Joss Whedon in the latest version of Much Ado About Nothing.

This famous tale has been the inspiration for countless romantic comedies over the years while the main play itself was adapted for the screen in 1993 by Kenneth Branagh. This time around, Joss Whedon of Buffy the Vampire Slayer fame gives us his interpretation. Whedon is a creative writer/director who doesn’t seem to have any fear. Fans of his previous work have seen some pretty deft examples of unique creativity along with a wonderfully witty sense of humor. Whedon taking on Shakespeare seemed both curious and compelling at the same time.

The story focuses mainly on a pair of would-be lovers. Beatrice (Amy Acker) and Benedick (Alexis Denisof) have a history but never miss a chance to proclaim their utter disdain for each other and for all things involving marriage. Meanwhile, Benedick’s friend Claudio (Fran Klanz) and Beatrice’s cousin Hero (Jillian Morgese) have fallen into a classic case of young love. The two plan to marry at once, which sets the stage for the rest of the deeper plot.

Whedon puts his stamp on the material by taking a period piece and refashioning it for the modern era while, at the same time, keeping the original Early Modern English dialogue. He also filmed it entirely in black and white. These artistic choices create an unavoidable fulcrum with regard to audience enjoyment. You’re either going to be a fan of the approach or you’re not. Such films can only get made by directors with some real pull. Trying to sell a production company on the profit potential of a black-and-white film in Shakespearean English is a plot in and of itself — Springtime for Hitler anyone? A lesser player would be laughed off the lot. 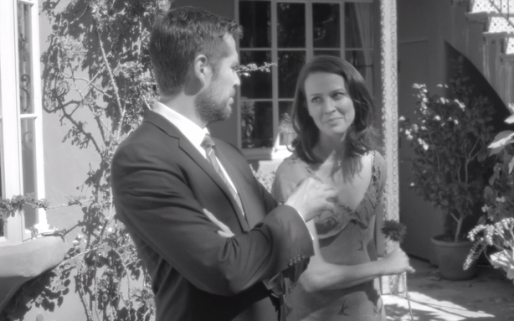 For me, the result is a mixed bag. The acting is absolutely wonderful. The four leads do a fantastic job of drawing in the audience and connecting us to the magical powers of love let loose. The story, as always, is a winner. Watching Benedick and Beatrice go at one another while feeling the unmistakable undercurrent of magnetism is simply marvelous.

On the other side, the choice of dialogue and lack of color create a distraction that cannot be ignored. Shakespearean text isn’t often immediately clear. It needs a moment to be digested and fully understood, and that can’t be done quickly enough in a film. Thus, large swaths of dialogue are missed while the viewer is still making heads or tails of a previous line. Anyone who’s ever watched a subtitled film knows what I’m talking about. It’s like trying to catch up after looking away for just a moment and realizing you’ve missed a few lines.

Mixing the eras is also a challenge. References that make complete sense in a period piece create complications in a modern telling that take you out of the moment. The names alone don’t fit the time, nor do many references. In one case,  Whedon cast a secondary male character as a female but left original dialogue in place that later refers to her as a man. Why? Your guess is as good as mine.

The choice of black-and-white filming is a complete loss for me. I see no value in it whatsoever. It added nothing to the effort and comes off as entirely unnecessary.

Taken together, the two choices feel like a gimmick — especially the latter — and created a needless distraction that took me until the middle of the film to forget. As I said, if you’re a fan of such choices, then you’ll likely find much here to enjoy. This is a smart comedy with a nice bit of slapstick campiness and a lot of heart. If you’re not a fan, then you’re going to find this to be a complete, pretentious, tedious bore.