Two 14 year-old boys discover a boat lodged in a tree on a remote island along with the curious stranger living in it, who goes by the name of Mud. 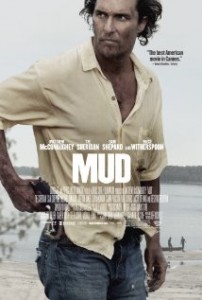 This is one of those movies that reviewers go entirely gaga over. Incredible acting, great look and deep messages.

Jeff Nichols headed up a compelling project that does, indeed, sport performances from just about every actor that deserves positive recognition. Matthew McConaughey evokes the perfect misfit to play the title character. The audience is never sure what to think when it comes to what’s really going on in his head. He’s likable but creepy, dirty but polished, cunning but believable. Ellis (Tye Sheridan) and his best friend Neckbone (Jacob Lofland) are both wonderful as the two 14-year-olds who come upon the boat and, ultimately, Mud. Likewise Reese Witherspoon, Sam Shepard, Michael Shannon (in a non-Shannon role for a change), Sarah Paulson, Ray McKinnon and the rest of the cast. The latter two play Ellis’s parents and do so with absolute aplomb.

The look is also well done. It’s a soft, grainy, gritty look that gives this an aged, more believable feel that plays into the southern storyline.

The life affirming messages are also played out throughout the film and, as I said, act as the final ingredient for perfect reviewer bait.

There’s just one missing ingredient with the film, and that’s any real hint of enjoyment. It’s a plodding affair that took two -and-a-half hours but could have been much better told in 90 minutes. It also seriously loses its way once Joe Don Baker shows up. His story line is so ridiculous that it destroys all the credibility earned up to that point.

As the ending approaches, there’s a culminating scene involving Ellis’s family that’s just completely ludicrous from start to finish. The final scene not only doubles down on this but firmly flies in the face of a shot that happened moments before it. Why?

I also have to take issue with the messages the movie conveys. They’re not only so heavy-handed as to be delivered with a sledgehammer, but they’re also extremely questionable in nature. This is not a film I would want any child below the age of 16 seeing.

Mud is highly compelling in parts — curious in others. It’s wonderful to observe from a purely artistic standpoint but an absolute bore to sit through with regard to entertainment value.