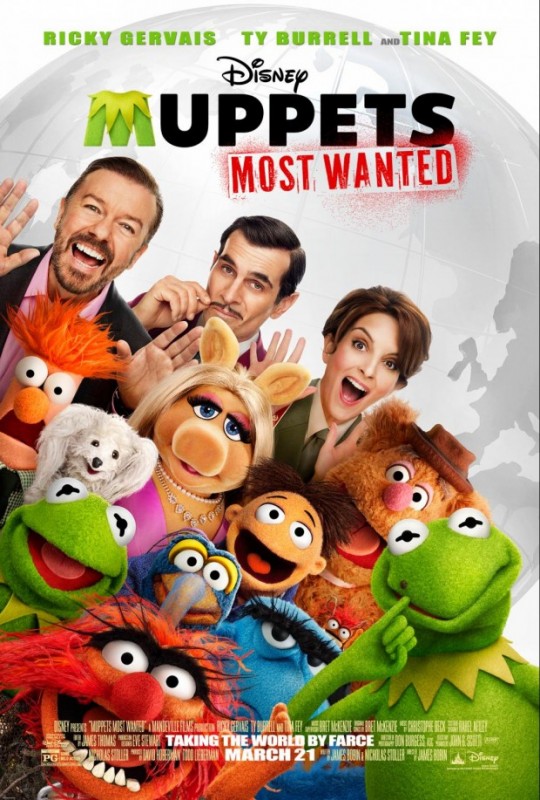 I grew up at the perfect time for the Muppets. I was a child when Sesame Street started airing on PBS, and The Muppet Show came a few years later with a whole new batch of characters that were better in many ways than the iconic creations on Sesame Street. The Muppets jumped to the movies next with great success. I continued to follow them into adulthood and beyond, even playing the familiar “Mahna Mahna” song as background music when I made news announcements on the radio as a college DJ. Much like The Three Stooges, you either get and like the humor of the Muppets, or you don’t. The 2011 film The Muppets kickstarted the film series again, but it wasn’t nearly the wacky, funny movie that I hoped it would be. Muppets Most Wanted gets it exactly right and builds upon the success of the previous film for an almost perfect celebration of the joy and humor of the characters created by Jim Henson over three decades ago.

Muppets Most Wanted literally begins with the words “The End” from The Muppets on screen as a neat continuation of that story. Cowriter/director James Bobin (writer/director on Da Ali G Show and Flight of the Conchords) reprises his role as director of The Muppets, and cowriter Nicholas Stoller (director of Forgetting Sarah Marshall, writer/director of Get Him to the Greek and cowriter/director of The Five-Year Engagement) returns to write this movie, surprisingly without the participation of huge Muppets fan Jason Segel. Following the triumph of the Muppets over the oil tycoon, a slimy promoter named Dominic Badguy (Ricky Gervais) offers the Muppets a world tour to capitalize on their new-found appreciation. Kermit the Frog (voiced and performed by Steve Whitmire), Miss Piggy (Eric Jacobson) and their friends can’t say no to performing all over the world. Introduced in The Muppets, Walter (Peter Linz) joins his new friends on their adventure. What they don’t know is that Kermit has a look-alike named Constantine (Matt Vogel) who has switched places with Kermit and that Dominic works for Constantine to help him set up and commit the theft of the Crown Jewels. The tour takes the Muppets to major cities Berlin, Madrid, Dublin, Moscow and London, and other notable human characters include Nadya (Tina Fey) at a Russian Gulag prison and Interpol agent Jean Pierre Napoleon (Ty Burrell of Modern Family and the voice of Mr. Peabody in Mr. Peabody & Sherman).

This movie includes all of the familiar Muppets like Fozzie Bear, Animal and Gonzo, but it goes deep into the Muppets roster of characters. I didn’t expect to see some of the Muppets who appear because there just isn’t enough time to give them much to do here. Still, I delighted in their appearance even if it was just for one gag. After a second movie, Walter is just a boring, bland character to me despite doing important things in each movie. I would much rather watch those troublesome chickens run around the screen than spend a lot of time with Walter. Fortunately, the movie never stops with the parade of Muppets, so if you don’t like one of them, wait a minute and you’ll move on to others. Constantine stands out from the rest because he’s patterned after Dr. Evil from the Austin Powers movies, including a solitary mole that identifies him and a way of holding his pinkie. The three featured human performers are good in this sea of Muppets. The cameos and minor characters are even more impressive, including a trio of prisoners (Ray Liotta, Jemaine Clement and Danny Trejo) who are hilarious. Surprise human cameos have always been part of Muppets movies, and there are some doozies here, including two celebrities who had the audience roaring when they appeared.

Humor is such a big part of Muppets Most Wanted that it’s guaranteed that you’ll leave with a smile on your face. The variety of humor should satisfy even the curmudgeons among moviegoers a la those old men Muppets Statler and Waldorf. There are visual puns (“Die Muppets” on a sign in Berlin), physical gags (anything with Salma Hayek and the bulls), jokes, stars poking fun at themselves (Lady Gaga, etc.) and tons of pop culture references like the famous Broadway musical that the prisoners interpret. The movie needs at least a second viewing to catch more of the humor you missed the first time. The original songs by Bret McKenzie, who also wrote the songs for The Muppets, vary from silly to anthemic and are as much a part of the humor in the film as the dialogue. “We’re Doing a Sequel” starts the movie off, and the songs show up frequently over the course of the film, including Muppets variations on popular numbers like “Moves Like Jagger.” 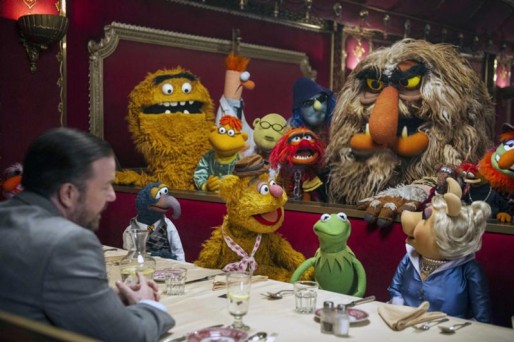 The special effects are seamless and never make you think that the Muppets are anything but real. We just share their world, and I was always impressed with this illusion from Sesame Street till today. Bobin does use digital effects to let Muppets do things like fly and jump around that they simply can’t do with human performers. For example, Constantine bounces around the screen like Yoda in the Star Wars prequels. With this modern digital technology, it’s now possible to see the entire bodies of Muppets instead of just the upper halves. I’m so glad that this film avoids the whole 3D trend. You can sit back and enjoy the colorful characters and world without the 3D glasses and gimmickry.

A bonus for this film is the connected Monsters University short Party Central that shows what happens when the characters of that movie throw a frat party and use their closet door system to divert guests to their shindig. This short reminds me of the synergy of Disney in that they own the Muppets, Star Wars and Marvel; there is certainly a future in which properties can share the same screen and, perhaps, universe. Muppets Most Wanted is a little on the long side, but it doesn’t feel that way as it keeps the jokes flowing and the plot moving from city to city. Now that Bobin and Stoller have hit their rhythm, I hope that they produce another Muppets movie of this quality every few years. Until then, waka waka waka down to your neighborhood theater to catch this modern Muppets mission.