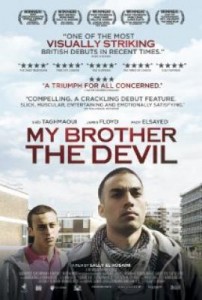 Family members involved with crime go back much further in the movies than The Godfather. Conflicts between brothers go back even further than that if you take it all the way to Cain and Abel. These subjects are explored in detail in the poorly named My Brother the Devil. The glamour of easy money from street crime attracts two brothers, but the film fails to reach another level by wandering into a secondary subplot that doesn’t add to the main story as much as it confuses it. There’s still a lot to like here, which almost erases the flaws.

My Brother the Devil is the feature film debut of writer/director Sally El Hosaini. She was born in Wales and raised in Egypt, so she has a unique perspective about the blending of cultures in a family. The film focuses on two brothers in an Egyptian family living in the Hackney neighborhood of London. Older brother Rashid (James Floyd) has his place in the gangs, and younger brother Mo (Fady Elsayed) sees this lifestyle and wants to emulate it. That’s the last thing that Rashid wants because he hopes to guide Mo to a better life in college and beyond with the money he earns in his illegal activities so that it at least goes to some good. This struggle for Mo’s attention between the streets and Rashid makes up the central conflict. Rashid gets a glimpse of a better life for himself, too, when he meets Sayyid (Said Taghmaoui of many movies and, recently, the TV show Touch). Rashid has an artistic side that he never explores, and photographer Sayyid offers him an opportunity to pursue that dream.

I wish that the film had focused on the brothers and left out the story line with Rashid and Sayyid entirely, but that was El Hosaini’s vision for this movie. The bonus from that decision is the involvement of Taghmaoui, a French actor whose parents emigrated from Morocco. Taghmaoui brings an aura of authenticity and seriousness to this role and others that I have seen him perform. He has played a number of ethnicities, too, because he has one of those faces that can be European, Middle Eastern and everything in between. Floyd and Elsayed are good, too, and they really need to be to carry off their roles and make the drama believable. Rashid’s gang’s name is DMG (for “Drugs, Money, Guns”), and a key point for his turnaround is when both a dog and a man get stabbed in a street fight. Sadly, Mo looks to the thug life as another way for him to move forward instead of the chance that he could end up dead.

It’s interesting to note that El Hosaini is able to deliver such a compelling film that details the rhythms and conflicts between brothers. You might expect that more from a male filmmaker. Where she fails to some extent is by expanding this relationship with the addition of Sayyid. Rashid is torn between his own bright future as an artist and stepping in to protect and nurture Mo when it’s needed. This subplot almost feels like another movie because Mo’s actions toward Rashid just don’t follow the earlier brotherhood. This might have worked if there was a distinct separation between Rashid and Mo’s story in which Rashid gets Mo away from the gangs before Rashid tries his next career. As it is, the plot sometimes gets jumbled.

I really dislike the title of this movie. Although it could refer to either Rashid or Mo, it would be nice if it were more defined in its named “devil.” Neither brother is as bad or as corrupt as that. Perhaps the title speaks more to the feelings about gangs and criminals of the brothers’ family and community. This is a film steeped in culture because the brothers have to hide their criminal involvement from their friends and family. The use of the Cashtastic song “My Life” is perfect for the subject matter and gives the film a haunting quality. With a bit more focus, El Hosaini could produce a really solid drama or crime film. I look forward to that next effort. My Brother the Devil shows that promise and displays some great filmmaking skills.